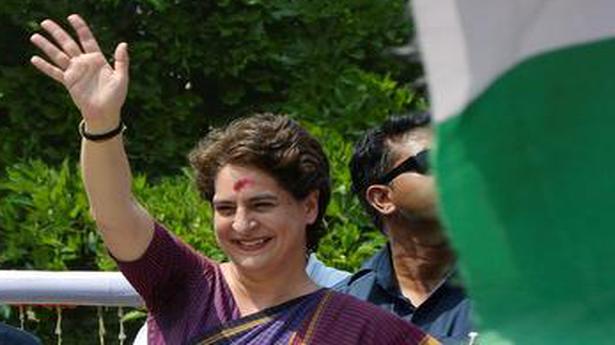 Ms. Vadra also slammed the Prime Minister for withdrawing Assam’s special status granted by the erstwhile Congress government during a roadshow at Silchar in the State’s Barak Valley to seek the support of voters for party candidate Sushmita Dev.

“Modiji has a lot of time to visit America, Africa, Japan and other countries but he doesn’t have even five minutes time to visit Varanasi,” she said.

Ms. Dev, party candidate in Silchar and president of the All India Mahila Congress, is the daughter of former Union Minister Santosh Mohan Dev. She is seeking to retain the Silchar Lok Sabha seat where her main challenger is Rajdeep Roy of the BJP.

The Bengali-dominated Barak Valley has two of Assam’s 14 Lok Sabha seats. Various Bengali groups want assurance of citizenship for thousands of people of the Valley who missed out on the National Register of Citizens being updated in Assam.

Expecting a fractured mandate in the ongoing Lok Sabha elections, L. Hanumanthaiah, Congress leader and Rajya Sabha member, said that senior Congress leader M. Mallikarjun Kharge might emerge as the party candidate for Prime Ministerial post in the event that Congress did not get enough seats to form the government at the Centre. He was […]