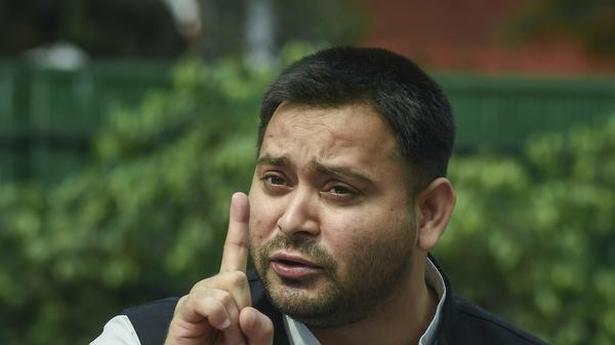 The Opposition parties in Bihar attacked Prime Minister Narendra Modi for dragging the Army into his address to the NDA’s Sankalp rally in Patna on Sunday allegedly to garner votes in the upcoming Lok Sabha polls.

Earlier, Mr. Yadav said, “Modi ji had promised special category status to Bihar but till date the promise has not been fulfilled”. He also advised Chief Minister Nitish Kumar not to be “afraid of PM Modi and demand the genuine rights of Bihar”.

His father and RJD president Lalu Prasad as well as leaders of the Congress and the CPI highlighted the “thin crowd” at the Sankalp rally. “Narendra Modi, Nitish and (Ram Vilas) Paswan have worked for months to organise the rally at Gandhi Maidan using government machinery. The number of people the rally has attracted is similar to the gathering I could have attracted if I stopped by a roadside paan-shop,” tweeted Mr. Prasad, who is currently undergoing treatment at a government hospital in Ranchi while serving a prison term in the fodder scam. Mr. Prasad also claimed that the organisers of the rally used “clever camera movements, magnified images and optics to show a large crowd at the PM’s rally”. “The great, justice-loving citizenry of Bihar has shown BJP its true position. In the face of his failed plans, a man resorts to lies and gimmicks. The fear of BJP’s possible defeat has shaken the confidence of the party to such an extent that their leaders need a speech teleprompter to speak even in Hindi,” said Lalu Prasad’s another tweet.Leaders of the Congress and the Communist Party of India from Bihar too referred to the meagre crowd at the NDA’s rally “Despite all the government machinery and resources, there was a thin crowd at the rally,” it was even smaller in number that what had gathered at Congress Party’s Jan Akansha rally held a month back on February 3 at the same Gandhi Maidan in Patna…PM Modi only attacked Congress party in his speech said senior State Congress leader Sadanand Singh.

The state secretary of the CPI, Satya Narayan Singh accused the NDA of misusing government machinery and resources to make the rally successful even as he thanked the people of Bihar for making NDA’s rally a “flop”.

However, the ruling NDA leaders dubbed the Sankalp rally a “historic one in the political history of Bihar”. “Over five lakh people had attended the rally…people had come from every corner of the state to hear about their loving Prime Minister”, said senior state BJP leader Sushil Kumar Modi. The JD(U) leader and party MLC Neeraj Kumar too said “rally was hugely successful”.

Google is ending its free WiFi service at several Indian stations and around the globe. The service called ‘Station’ was started way back in 2015. It was first launched at Mumbai Central railway station. Currently, there are more than 400 railway stations equipped with this facility called RailWire. It is provided by RailTel which is […]

Dynastic politics should end, but will take time: Vishwanath

Janata Dal (Secular) State president A.H. Vishwanath has dismissed the Opposition criticism that his party, which is set to field the third member of a family as its candidate for the Lok Sabha elections, is taking dynastic politics to new heights. Excerpts from an interview. JD(S) supremo H.D. Deve Gowda has announced the candidature of […]

Amid the gloomy atmosphere accompanying the COVID-19 crisis, it is the tribal heartland of Adilabad that has given some reason to be happy. The 10-month-old project involving a group of poor Adivasi women in making eatables and savouries from the sacred mahua or ippa flowers (Madhuca indica) has bagged a ₹ 16 lakh order for […]