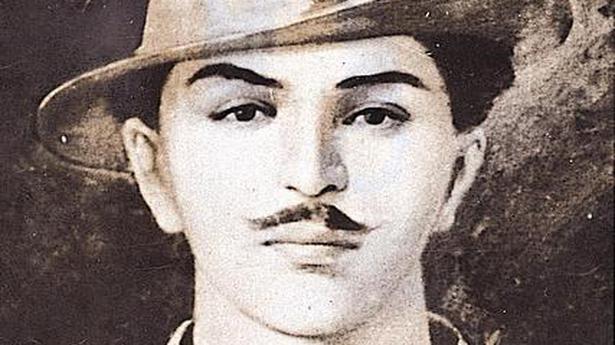 “His valour and courage and the great sacrifice made by him for the country’s freedom will continue to inspire every Indian for all times. The nation is ever grateful to the iconic nationalist,” Mr. Naidu said.

The prime minister said Bhagat Singh remains among the most popular icons in the minds of the youth.

Union Home Minister Amit Shah also tweeted in Hindi saying Bhagat Singh inspired the whole nation to fight for freedom. “With his courage, ideals and nationalism, Singh has been an inspiration for all.”

The official Twitter handle of the Congress party said the responsibility of building a nation of Bhagat Singh’s dreams is on the youth, “which they need to fulfil”.

Bhagat Singh was born on this day in 1907 in the Punjab Province of British India. He was convicted for killing British police officer John Saunders and was hanged in March 1931.

The paddy harvesting season has started in Punjab and the State has already recorded a 45% increase in stubble burning incidents till October 11. However, the administration hopes the farm fire counts will come down gradually as a result of intensive interventions made this year. The period between October 15 and November 15 is considered […]

Congress leader Milind Deora on Tuesday described as “unfounded” speculation of his future political path, after the exchange of tweets between him and Prime Minister Narendra Modi on the latter’s US visit. Milind Deora had triggered speculations about his future political role after he praised Mr. Modi’s address in Texas as a momentous first for […]

Season of Vallasadya to end on Oct. 6

Curtains will come down on the three-month long annual season of Vallasadya at the Sree Parthasarathy Temple at Aranmula on October 6. The Palliyoda Seva Sanghom, apex body of the Palliyoda Karayogams having their own snakeboats (Palliyodam), organises the Vallasadya. According to PSS general secretary P.R.Radhakrishnan the sanghom has received bookings for a total of […]