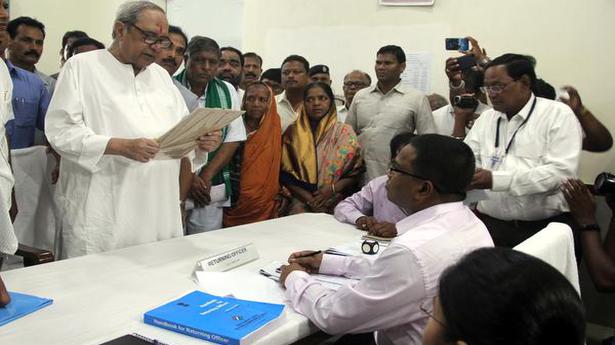 He was the first BJD candidate in the State to file nomination papers for the coming polls.

Since becoming the Chief Minister in 2000, Mr. Patnaik has contested and won from Hinjili four times in a row. This time around he has decided to contest from one more seat — Bijepur Assembly seat in Bargarh district in western Odisha — which will go to polls in the second phase. Polling for Hinjli will be held in the first phase.

This is the first time Mr. Patnaik will contest from two seats in the Assembly elections. He will file his papers for Bijepur in Bargarh district when the nomination process for the second phase will start.

On Wednesday, he submitted four sets of nomination papers for Hinjili before Assistant Sub-Collector S.N. Nayak.

To demonstrate the BJD’s commitment to social and political emancipation of women, Pramila Bisoi, a women self-help group activist, accompanied Mr. Patnaik when he submitted his nomination papers at the district headquarters town, Chhatrapur. Ms. Bisoi is the BJD’s candidate for Aska parliamentary constituency.

Most senior leaders of Ganjam district were present at Chhatrapur along with a huge crowd of BJD supporters. The crowd included large number of women, who chanted slogans in favour of the Chief Minister.

Before reaching Chhatrapur, Mr. Patnaik visited Tara Tarini hill shrine in the district to worship the twin mother deities revered throughout the State.

Speaking to newsmen after filing his nomination, Mr. Patnaik reiterated that the BJD will win plenty of seats and will again form the government in the State.

India and Pakistan on Thursday signed an agreement to operationalise the Kartarpur corridor that will facilitate pilgrims from India to visit the Gurdwara Kartarpur Sahib in Pakistan. The agreement is valid initially for five years. India will hand over the list of pilgrims to Pakistan 10 days in advance and those granted permission to go […]

Temple in Ayodhya will come up within four months: Amit Shah

BJP president Amit Shah on Monday said a grand Ram temple would come up in Ayodhya within four months as per the wishes of Indians all over the world. Mr. Shah also took a dig at Congress leader Kapil Sibal, who was representing Muslim parties in the Ayodhya case in the Supreme Court. “Congress leader […]

A press briefing convened by former Minister and JD(S) MLA S.R. Mahesh on Wednesday was called off at the eleventh hour after poll officials issued a fresh reminder of the ban on public campaigning ahead of the December 5 polling in Hunsur. Public campaigning has been banned from 6 p.m. on Tuesday till the conclusion […]