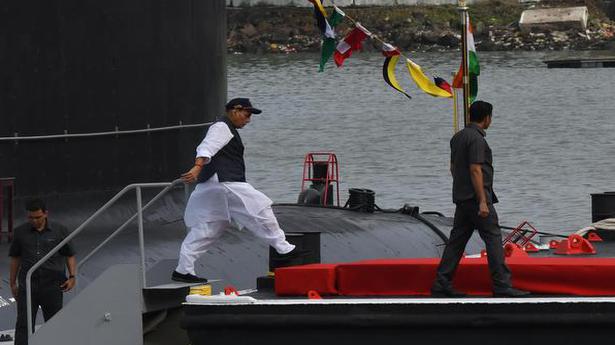 Recalling the “exceptional role” played by the Navy in the 1971 war when Operation Trident and Operation Python “broke the backbone” of the Pakistan Navy, Defence Minister Rajnath Singh on Saturday said the Indian Navy was now capable of delivering a “much bigger blow,” if need be. He said this after commissioning the second Scorpene submarine Khanderi into the Navy in Mumbai.

“Pakistan should understand that, today, with the strong resolve of our government and advancements in naval capacity with additions like INS Khanderi, we are capable of giving a much bigger blow to it, if need be,” Mr. Singh said. He later inaugurated an aircraft carrier dry dock and launched the first of the seven Project 17A frigates, Nilgiri, into water.

However, he stated that the Indian Navy would not pose a threat to any peace-loving nation and in fact wanted to build a “sense of confidence and mutual trust with all big and small nations in the Indian Ocean Region.”

Mr. Singh, as well as Navy chief Admiral Karambir Singh, stressed that ship building was a labour-intensive industry and, apart from employment generation, had significant ploughback into the economy. Of the 51 ships and submarines currently on order, 49 are being constructed indigenously.

The construction of one frigate itself provided direct employment to 4,800 personnel and indirect employment to around 27,000 for a period of eight years, Mr. Singh stated, and added, “Almost 87 % of the total warship cost is invested in the Indian economy, which is a significant contribution.”

Khanderi is the second of six Scorpene-class conventional diesel-electric submarines being built by Mazagon Dock Limited (MDL), Mumbai, with technology transfer from Naval Group of France under a 2005 contract worth $3.75 billion. After a series of delays in the project, the first submarine of the class, Kalvari, joined service in December 2017. Khanderi was launched into water in January 2017 and has since been undergoing a series of trials. The remaining four submarines are in advanced stages of manufacturing and trials.

The induction was delayed because of issues encountered during trials and the Navy had insisted that the submarine be fully ready before induction. Navy vice-chief Vice Admiral Ashok Kumar recently said “all issues of Khanderi are resolved.”

The dry dock inaugurated is the country’s largest, capable of servicing the 44,500 tonne aircraft carrier INS Vikramaditya and, in the near future, the first indigenous carrier Vikrant, which is in advanced stage of construction at Kochi.

The 6,500-tonne frigates under P-17A is a follow-on to the P-17 Shivalik class of ships, of which four will be built by MDL and three by Garden Reach Shipbuilders and Engineers Ltd of Kolkata. The launch weight of Nilgiri is about 2,500 tonnes and the remaining work would be completed outside the dry dock. It is expected to be commissioned into service in 2022.

From Mumbai, Mr. Singh will proceed to Goa, where he will spend a day at sea onboard INS Vikramaditya.

NLC India Ltd. (NLCIL) on Thursday announced a solatium of ₹30 lakh each to the families of the six contract workers who passed away in a massive expl Source: thehindu.com Related