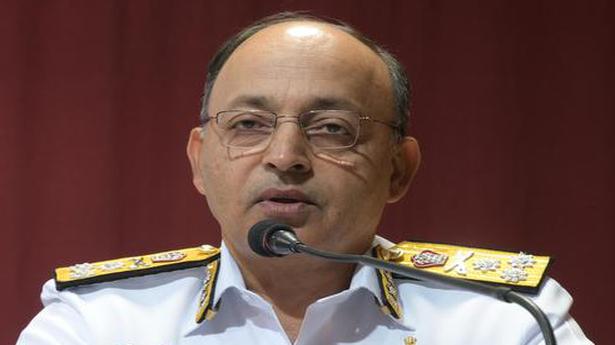 The Navy on Tuesday said it has decided to set up women-friendly facilities on its indigenously-built aircraft carrier and other bigger ships amid demands for induction of women.

Vice-Admiral Anil Kumar Chawla, Flag Officer Commanding- in-Chief, Southern Naval Command, said the first indigenously-built aircraft carrier Vikrant would be women- friendly. His statement comes a day after Sub-Lieutenant Shivangi became the first naval woman pilot to join operational duties in the presence of top officials at its base here. Fulfilling her long-cherished dream, she received her ‘qualification wings’ from the Vice-Admiral on Monday.

He was addressing a press conference on board the INS Tir at South Jetty, Naval Base, here. The Vice-Admiral said, “We’ve already started incorporating women-friendly facilities on the aircraft carrier and other bigger ships.”

“In the combat branch, which is basically on warships and submarines and the aircraft that goes to sea, there are certain requirements. There are logistic issues being sorted out. We need separate accommodation for women, separate toilets and other such facilities for them,” he said responding to queries on a delay in deployment of women on warships.

Asked whether Vikrant being built in Cochin Shipyard Limited would have women-friendly facilities, the Vice-Admiral said, “Yes”. He said the aircraft carrier would be put to sea next year after the ship completes its trials. The ship should be commissioned in 2021 as was planned, he said.

A roadmap has been prepared by the Navy on deployment of women on warships, which has been a long-pending demand. The Vice-Admiral said legal and other issues needed to be sorted out before putting women on combat duty. The appeal in this regard was pending in the Supreme Court. “It is up to the court to decide,” he added.

In a first, Interim Resolution Professional booked for graft

In a first, the Central Bureau of Investigation (CBI) has arrested an Interim Resolution Professional (IRP), along with the director of an asset reconstruction firm, for allegedly demanding and receiving a bribe from a former consultant to a Hyderabad company. The accused have been identified as Arun Mohan, the IRP, and Paresh Kumar, the director […]

All colonies in Yadiki village of Anantapur district were under three-foot deep water on Thursday night as rain continued till Friday morning. This was the second time in the last 10 days, the villages in Yadiki mandal were flooded. Rescue operations were launched immediately. According to residents, there was more damage to the cotton and […]