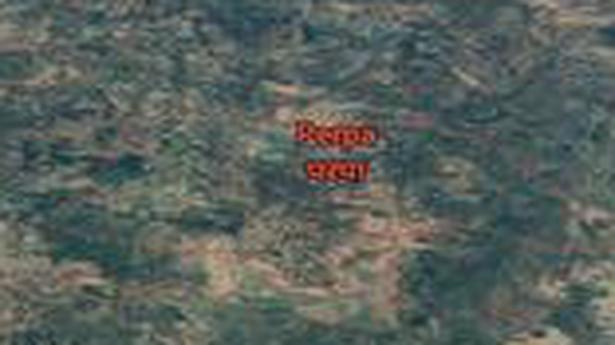 A Naxal commander, carrying a cash reward of ₹8 lakh on his head, was killed in an encounter with security forces in Dantewada district of Chhattisgarh on May 2, police said.

The face-off took place in the forest under the Kirandul police station area when a joint team of the District Reserve Guard (DRG) and District Force (DF) was on a search operation in the morning, Director General (Anti-Naxal Operations) Girdhari Nayak told PTI.

“When the patrolling team was advancing through the forest between Perpa and Markamaris villages, around 450 km away from capital Raipur, it came under fire from a group of ultras that led to the gun battle,” he said.

After the exchange of fire stopped, the body of a Naxalite, later identified as Madvi Muiya alias Joga Kunjam (29), was recovered along with a .315 bore gun, he said.

“Kunjam, who was active as a commander of military platoon-24 of Maoists, was carrying a reward of ₹8 lakh on his head,” he said.

He was allegedly involved in the deadly Burkapal attack on April 24, 2017 in Sukma district in which 25 security personnel lost their lives, the officer added.

‘Vivian had died following a heart attack on April 23 and investigations had ruled out either COVID-19 or any kind of assault as the cause of death’ Source: thehindu.com Related

The students of the Government Higher Secondary School at Poovalur in Tiruchi district have a reason to rejoice — a brand new toilet complex constructed with the help of donations in kind from well-wishers and friends. The washrooms have wash basins, sanitary napkin vending machines and incinerators. Of the 13 toilets in the complex, one […]

A special Prevention of Money Laundering Act court on Tuesday extended the ED’s custody of Housing Development Infrastructure Limited’s (HDIL) directors Rakesh Wadhawan and his son Sarang till October 24. The agency sought their custody on the grounds that they had identified 50 more HDIL properties, which they believe were bought from the proceeds of […]