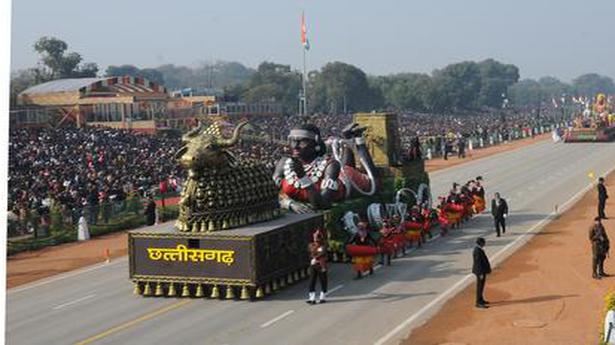 Chhattisgarh Governor Anusuiya Uikey on Sunday said that Naxal violence and other crimes have declined in the State due to vigilant police force and several initiatives in justice delivery.

In her Republic Day address to the State at the Police Parade grounds in Raipur, Ms. Uikey also hailed the government’s three-pronged strategy of “trust, development and security” to improve the law and order situation in the state.

“Vigilant police force and justice delivery initiatives have resulted in reduction of Naxal violence and other offences. The Naxal rehabilitation action plan of the state has been made more attractive,” she said.

“With its three-tier strategy of trust, development and security, the State government has improved the law and order situation in the State. Several steps like giving weekly offs and response allowance to police force have boosted their morale,” she said.

Besides, public awareness campaign is being run to prevent crimes related to chit funds, human trafficking and cyber crimes.

Lauding various schemes of the State government, the governor said, “My government has taken such a new initiative in the last one year, due to which every citizen’s confidence of getting equal opportunity and justice has gone up.”

The State government is primarily focused on ensuring relief to the most backward regions, weakest sections and needy people of the State.

Returning acquired land of villagers in Lohandiguda (Bastar), hike in remuneration for tendu leaves collection to ₹4000 per standard sacks,reviewing cancelled forest rights claims, withdrawing criminal cases against tribals, purchase of 22 minor forest produce on support price, nutrition campaign and many other decisions were taken in this direction, she said.

The decisions of purchasing paddy at ₹2,500 per quintal and loan waiver have also encouraged the farmers, she added.

“There has been a tremendous expansion of road infrastructure in the State. In one year, construction of 28 major bridges were completed while 119 are in progress, she said.

Earlier, the Governor unfurled the tricolour and received the guard of honour from the joint parade of the various units of security personnel including CRPF, CISF, ITBP, Maharashtra Reserve Police Force and Chhattisgarh Armed Force, and National Cadet Corps, National Service Scheme, Scout and Guide students at the Parade Ground.

Work on DMIC’s Rajasthan portions to be fast-tracked

Work on the portions of the Delhi Mumbai Industrial Corridor (DMIC) falling in Rajasthan will be expedited with the establishment of a special purpose vehicle (SPV) subsidiary company. The compensation for land acquisition for the project will be paid to farmers in two villages of Alwar district in the camps to be organised next month. […]

The Telugu Desam Party (TDP) national general secretary Nara Lokesh has expressed apprehensions over the veracity of the Covid tests being conducted b Source: thehindu.com Related