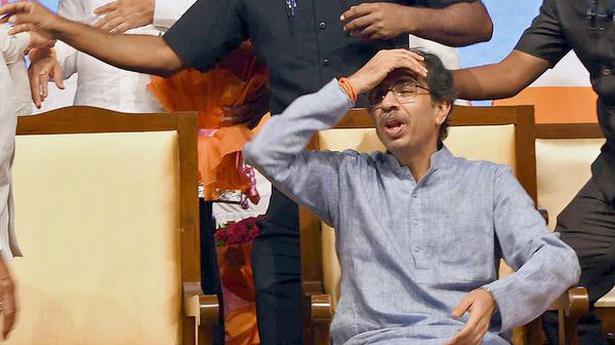 Shiv Sena chief Uddhav Thackeray on Tuesday said despite his party being in the State government for the last five years without much power, he never betrayed or conspired to pull it down. He said in an alliance, both parties need to exercise caution and if the speed is accelerated unnecessarily, it could lead to an “accident”.

In the second part of his interview to Sena mouthpiece Saamana, Mr. Thackeray spoke about his party’s objection to the tree felling in Aarey Colony here, saying they are not against the Metro car shed, but the place where it is proposed. “Development should not happen by causing hardships to people,” he said, asserting that the Sena will continue to raise its voice on issues pertaining to citizens.

He also expressed confidence that the Bharatiya Janata Party (BJP)-Sena alliance will provide a much better administration and governance, if it wins the State polls again. When asked about the party’s protest over crop insurance, Mr. Thackeray said he takes a stand on issues concerning people. “When the government publicises its achievements, the work done is seen on the ground. I will continue to highlight people’s issues before the government,” he said.

“Did I betray the government or conspire to pull it down? No. We were in government without any power for last five years. There were differences, and we raised our voice wherever we felt things were wrong,” he said. Mr. Thackeray said that for the alliance to stay intact, both the BJP and the Sena must exercise caution.

“We need to control our mind. If you accelerate speed unnecessarily, you can meet with an accident. This has happened earlier,” he said, in an apparent reference to the breaking of the alliance ahead of the 2014 State polls. Mr. Thackeray said his party forged an alliance with the BJP in the interest of the State.

“I compromised for the sake of the State. I am confident we can provide good governance in the next five years based on the previous experience,” he said. “The experience Devendra Fadnavis had when he first became Chief Minister, some Sena ministers reached much before,” he noted.

On the raging issue of the felling of trees in Aarey Colony, which is considered the city’s lung, Mr. Thackeray said the Sena is not opposed to the Metro car shed, but its location. “The car shed in Aarey is opposed by Mumbaikars, not the Sena,” he said. “It is not my party’s personal issue. We need the Metro and development, but while doing so, we shouldn’t lose something more valuable,” he said.

Mr. Thackeray said Mumbai is the only city in the world to have a natural forest cover and wildlife. “The murderers of Aarey trees will have to pay a price for axing them in the middle of the night. (Sena corporator) Yashwant Jadhav, the petitioner, was fined ₹50,000 (by court) while dismissing his plea. But murderers of the trees will be responsible for damage to the environment,” he said.

The Sena chief said he was thankful to the Supreme Court, which restrained the authorities from cutting any more trees in Aarey Colony, for “taking a different stand”. On his party’s opposition to the Nanar refinery project, Mr. Thackeray said his party supported locals. “The Sena’s stand to oppose the project was not for my personal gain or the party’s political interest,” he said.

Even in the case of the Mumbai-Nagpur Samruddhi Corridor project, the locals opposed it, he said, adding that he went there and saw “fertile land being declared barren” by government officials. “This is not an anti-government stand. We spoke to the people opposing the project. We got the route changed by saving the farms,” he pointed out.

Justifying Prime Minister Narendra Modi’s criticism of the Congress and Nationalist Congress Party, and their leadership, during his campaigns, the Sena said if the opposition targets the alliance, “then we have to highlight their tenure”.

Noting that the Sena played the role of opposition many times, he said, “I am against misuse of power and politics of revenge. Don’t know about the Enforcement Directorate (ED). But misuse of the Central Bureau of Investigation is not new. You reap what you sow.” On claims that the ED was being misused to target political opponents, Mr. Thackeray asked, “Who are these opponents? Are they clean?”

“Nobody is targeting clean leaders. Will you agree that all those on the ED’s radar are clean?” he said.

To a question on speculations that he was also facing pressure from the ED, the Sena chief said, “What is the fear if you haven’t done anything wrong. I am a fighter’s son. I am not scared. Don’t experiment on me.”

On the Assembly polls, he said the Sena has to be prepared in all the 288 seats. “Preparation doesn’t mean contesting elections, or winning or losing. I want the Sena’s ideology to reach each and every ward,” he said.

Political parties in Tamil Nadu expressed contrasting views on the Election Commission’s decision to conduct the Lok Sabha polls in Tamil Nadu in a single phase. “It is a good decision. As far as Tamil Nadu is concerned, the AIADMK led alliance will win all 39 seats in Tamil Nadu and 1 seat in Puducherry,” […]

Even as the country is making all-out efforts for effective implementation of electric mobility, a sure-fire answer to many existing problems, a city-based indigenous firm ‘AVERA Energy’ is showing the path. A vertically integrated manufacturer in pure electric vehicles and energy retailer startup, AVERA’s Retrosa, a high-speed electric scooter, has received a shot in the […]

A few days after a woman COVID-19 patient uploaded a video of abysmal condition in a ward at Sir Ronald Ross Institute of Tropical and Communicable Diseases, renovation works were completed. In the video, the patient complained of poor condition in the ward, bathrooms, and presence of mosquitoes. She also complained that doctors did not […]