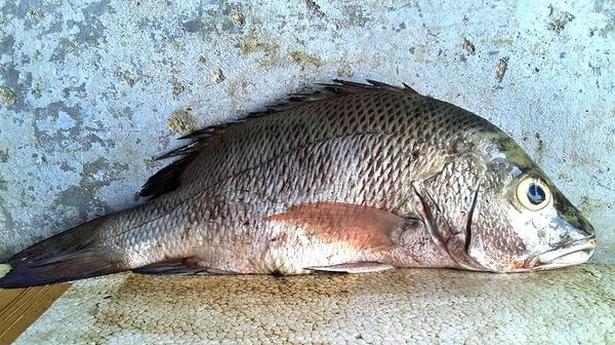 The high-valued fish has the potential to become the alternative species for Vannamei, which has been largely infected with white spot virus leading to bleak prospects for the brackish water aquaculture in recent years in Coastal Andhra Pradesh.

In a bid to introduce an alternative species for Vannamei, the scientists of the Central Marine Fisheries Research Institute (CMFRI-Karwar in Karnataka) have started research a few years ago, intensifying their efforts to develop mangrove red snapper seed for commercial production.

Former CMFRI director G. Saida Rao told The Hindu, “We have begun the research on mangrove red snapper in Karwar in Karnataka in the mid-2000s to develop the seed. However, the commercial production of the species is yet to begin in the country.”

Mr. Saida Rao opined that the species had high market value across India and speedy growth had been recorded.

Lanka Raghu Sekhar, a progressive farmer from Nagayalanka village in Krishna district, has launched the commercial production in the floating cage in the Krishna estuary, examining the possibilities for mass cultivation in ponds. “At least 100 small-sized wild seed of mangrove red snapper has been collected from the Krishna estuary and its growth is impressive,” Mr. Raghu Sekhar said.

Mr. Sekhar is experimenting on the species to share the results with his fellow farmers and waiting for harvesting in the coming rainy season.

“At least one kilogram of growth of the wild seed can be expected within eight months.

“Farmers will focus on commercial production when institutions like the CMFRI promote mass cultivation by supplying the seed,” he said.

The proposed taxpayers’ charter in the Income Tax Act should include assurances that the government would live up to its commitment and does not suddenly tweak a proposed tax structure or go back on its promise, V. Ranganathan, chartered accountant, said on Sunday at a post-Budget session in Chennai. ‘Tax stability’ “A foreign company has […]

‘Campuses could not become political dens’

Human Resource Development Minister Ramesh Pokhriyal said on Monday that campuses could not become political dens. “The educational institutions are meant for education. They are autonomous. No educational institute will be allowed to become dens of politics,” he said in response to a question on the violence on Sunday at Jawaharlal Nehru University. Mr. Pokhriyal […]

Eighteen Nepali Muslims, who recently returned from India after participating in a Tablighi Jamaat congregation in Nizamuddin area in New Delhi, have been identified and kept in a quarantine facility in southern Nepal’s Saptari district, authorities said on Wednesday. Also read | Tablighi Jamaat and COVID-19: The story so far Famed for the shrine of […]