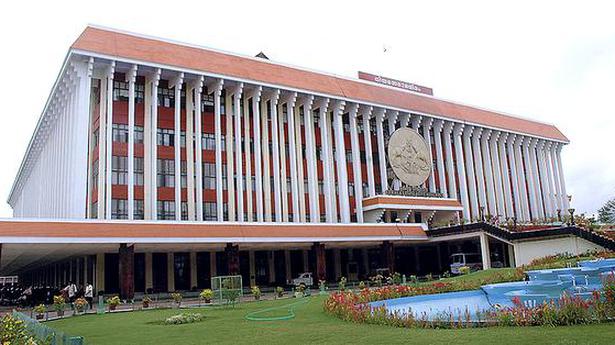 The 16th session of the Kerala Legislative Assembly, beginning here on Monday, would see the swearing in of five newly-elected members who had won the October 21 bypolls.

V.K. Prasanth, K.U. Jenish Kumar, T.J. Vinod, Shanimol Usman and M.C. Kamaruddin, who got elected from Vattiyoorkavu, Konni, Ernakulam, Aroor and Manjeshwaram assembly segments respectively, are the new MLAs to be sworn in on the opening day.

It is for the first time that the House is being convened after the crucial bypolls, which had seen the ruling CPI(M)-led Left Democratic Front (LDF) winning two seats and Congress-headed United Democratic Front (UDF) opposition three.

As in the April 22 Lok Sabha polls, the BJP-NDA has failed to increase its tally from the present one in the 140-member House.

The wresting of two sitting seats from the UDF would give the ruling benches a reinforced strength to counter the attack from the opposition members during the 19 day-long session, which would be concluded on November 21.

However, the 16th session is likely to be stormy as the UDF opposition is expected to raise several allegations including corruption charges against ministers and the government as they had already raised the issues in the public platforms.

The alleged mark scandal against Higher Education Minister, K.T. Jaleel and the auditing row in connection with the Kerala Infrastructure Investment Fund Board (KIIFB) are likely to be some among them.

The session would see a day-long commemorative meeting to mark the 150th anniversary of Mahatma Gandhi on November 9.

Significant Bills, including 16 Bills to replace the ordinance promulgated by the Governor, would come up during the present session.

The discussion and voting on the Supplementary Demands for Grants in the budget for the Financial Year 2010-20 would be held on November 5.

Protests against the contentious Citizenship (Amendment) Act (CAA) continued in many parts of the country on Saturday, as the death toll from widespread violence in Uttar Pradesh rose to 16. Fresh incidents of violence were reported from towns in Uttar Pradesh, while a bandh called by the Opposition Rashtriya Janata Dal in Bihar affected road and rail […]

The Central Food Technological Research Institute (CFTRI) has dispatched a consignment of ready-to-eat meals to flood-hit Hassan district. The consignment, which left Mysuru by road on Saturday evening, comprises of 4,000 chapatis, 70 kg of chutney, 100 kg of rusk, 6,000 bottles of drinking water, and around 300 kg of ready-to-constitute avalakki mix. While the […]

Traffic offences can be penalised under IPC: Supreme Court

Stressing the need to strictly punish offenders responsible for causing motor vehicle accidents, the Supreme Court has reiterated that a person can be prosecuted under both the Motor Vehicles (MV) Act and the Indian Penal Code (IPC) for driving dangerously. A Bench of Justice Indu Malhotra and Justice Sanjiv Khanna noted that there is no […]