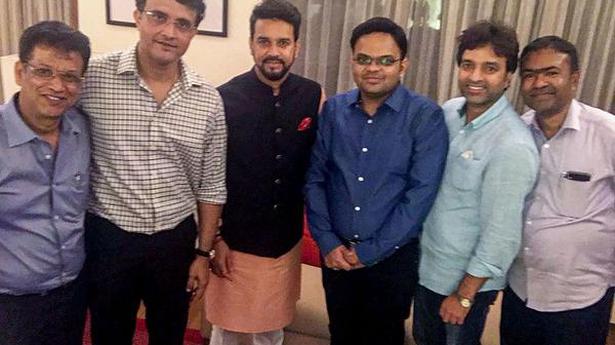 It wasn’t until a couple of phone calls between Delhi and Mumbai on Sunday night at approximately 9.30 p.m. that the decision that former India captain Saurav Ganguly would be the next chairperson of the Board of Control for Cricket in India was made.

The phone call, between a powerful Union Minister in Delhi and Assam Finance Minister Himanta Biswa Sarma, who was present in Mumbai at that time, and Union Minister Anurag Thakur swung things in favour of Mr. Ganguly.

Associations headed by BJP leaders decided to throw their weight behind his candidature instead of former India player Brajesh Patel, whose name had also been doing the rounds, as well as the eight-vote strong North Eastern Cricket Development Committee.

Indeed, Mr. Ganguly, returning to Kolkata after his election, said as much upon arrival, that he had made the requisite congratulatory phone call to Mr. Patel at around 9.30 p.m. on Sunday night, only to be told around 10.30 p.m., that his name had got the support of everyone for the post of chairman.

A late night meeting at a city hotel firmed up matters in his favour, with N. Srinivasan, who was backing Mr. Patel, giving way.

Mr. Sarma’s presence was also interesting. Earlier associated with the Assam Cricket Association (elected president in 2016), he now heads the badminton association. The northeastern States between them control eight votes for the poll of BCCI chairperson and, as the BJP’s go to man for the States, Mr. Sarma’s presence in Mumbai could also be explained.

While Mr. Ganguly has admitted that he did meet senior leaders of the BJP, including Home Minister Amit Shah prior to these developments, he denied that anything political had been discussed.

BJP sources, however, feel that the en bloc support of party leaders to Mr. Ganguly’s candidature cannot be without a larger plan in mind. The West Bengal polls are due in 2021 and the party needs a face to take on Chief Minister Mamata Banerjee. Till now, Mr. Ganguly has only endorsed the Swachh Bharat programme of the Centre and steered clear of any role in the BJP.

With Sunday’s developments, however, that prospect may not be so implausible.

More than 47.18 lakh candidates opted to use vernacular languages during their direct Railways recruitment exams in the past three years, with the highest number of candidates using Telugu, followed by Bengali and Marathi, Parliament was informed on Wednesday. “For examinations for direct recruitment, instructions provide for an option of 15 languages, which include Hindi […]

Life getting back to normal in Vijayapura