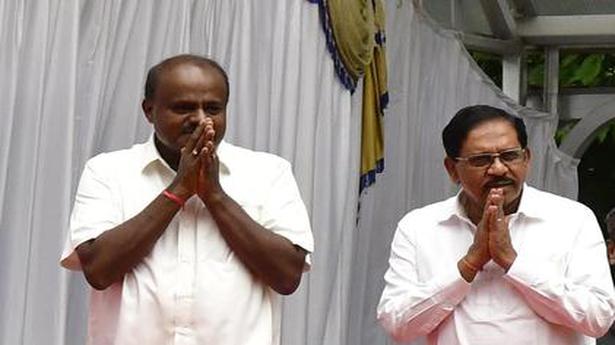 The Congress-Janata Dal (S) coalition government in Karnataka headed by Chief Minister H.D. Kumaraswamy has been on fire-fighting mode since it came to power after the fractured mandate in the State Legislative Assembly elections in 2018.

The latest development — resignation of two Congress MLAs from the Legislative Assembly on Monday — has put the government on a sticky wicket. Though for public consumption leaders of both parties maintain that the government is safe, sources in both the ruling parties suspect that more MLAs might quit membership of the Assembly in the next few days. All these are happening in the run-up to an extended Budget session of the State Legislature set to commence on July 12.

The government’s controversial decisions — such as allotment of 3,667.31 acres to JSW Steel in Ballari and last month’s expansion of the Cabinet with the induction of two Independents — has not gone down well with the senior and junior legislators of both parties. More than a dozen MLAs have lost hopes of becoming ministers since there is only one vacancy now in the Kumaraswamy Ministry, the size of which has been fixed at 34.

While Anand Singh, representing Vijayangara constituency in Ballari district, quit citing allotment of land to the steel plant, former Minister Ramesh Jarkiholi, representing Gokak in Belagavi district, quit from the Assembly membership claiming that he had been sidelined by the party. Mr Jarkiholi has been leading the dissident leaders group and has been threatening to quit membership of the Assembly ever since he was dropped from the Cabinet in December 2018.

Several senior legislators, including suspended MLA and former Minister R. Roshan Baig, have been openly questioning the criteria adopted for the Cabinet expansion and blamed the State and central leaders for the party’s poor show in parliamentary elections.

With the resignation of two MLAs, the Congress strength in the 224-elected member Lower House has reduced to 77, including the Speaker. The BJP has 105 MLAs, JD (S) 37, Independents – 2 and BSP – 1.

Nearly a dozen of disgruntled legislators are already said to be in touch with the Opposition BJP, which requires the resignations of another 13 MLAs to form the government on its own. But the saffron party seems to be in no hurry to form the government. It has been following a wait-and-watch policy, believing that the government will fall on its own owing to its inner contradictions. The party central leadership, conscious of perceptions, is said to be keen not to be seen as indulging in orchestrating defections

Though several former MPs, who had lost the recent Lok Sabha elections, have been issuing statements against the continuation of the alliance, sources indicated that the Congress was firm on keeping the government afloat for at least a few more months. A few former MPs have blamed the JD(S) alliance for the party’s Lok Sabha rout in the State.

Political activities would get more momentum once Mr Kumaraswamy, who is away in the US, returns to the State later this week. As the extended Budget session of the Legislature commences, it will interesting to see what options leaders of the coalition parties will adopt to pacify the disgruntled legislators to ensure survival of the government.

Efforts on to bring Jammu and Kashmir on religious tourism map

Jammu and Kashmir administration on Saturday said efforts are under way to bring the Union Territory on international tourist pilgrimage map as the region is replete with the historical religious sites of immense importance. K.K. Sharma, adviser to Lt. Governor G.C. Murmu, said this during his visit to the Buddhist site at Ambaran in the […]