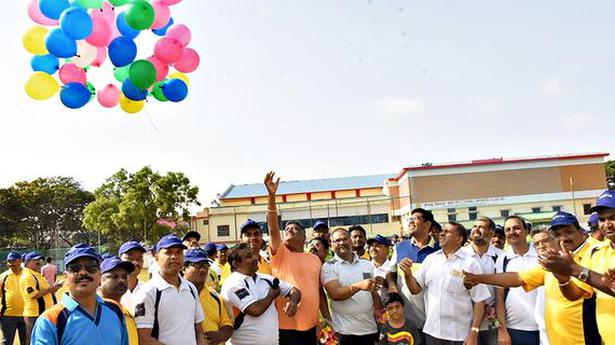 Media personnel, who often run around for stories, were found busy running to stop the ball from crossing the boundary on Saturday.

In the DDUWJ Shriya Trophy Cricket Tournament organised by Dharwad District Union of Working Journalists (DDUWJ) at the Deshpande Nagar playground here, 13 teams from print and electronic media are participating.

On the first day of the tournament, six matches were played between teams from different media groups after managing director of Shriya Properties Suraj Alavandi inaugurated it. Subsequently, together with chairman of Swarna Group of Companies V.S.V. Prasad, chairman of KSCA Dharwad Zone Viranna Savadi and CEO of Kannada daily Samyukta Karnataka A.C. Gopal, he released a bunch of balloons in the air to formally launch the tournament. Bureau chiefs of various newspapers and electronic media were present apart from president of DDUWJ Ganapathi Gangolli.

Six knock out matches of six overs each were played.

I can only pity the DMDK, says Durai Murugan

DMK treasurer Durai Murugan on Thursday said he could only pity the DMDK leaders who “were issuing contradictory statements” about approaching the DMK for an alliance for the Lok Sabha elections at the eleventh hour “trying to save their face”. Talking to reporters, the DMK leader said that he did not know the two DMDK […]

A petition has urged the Supreme Court to restore 4G mobile Internet service in Jammu and Kashmir as, it said, doctors, patients and the general public were unable to access the latest information, guidelines, advisories, daily updates and restrictions on the COVID-19 pandemic. Also read: Coronavirus | Positive cases in Tamil Nadu rise to 309 […]