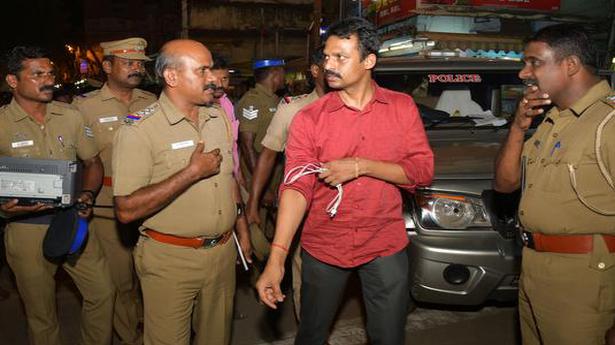 A day after the National Investigation Agency (NIA) raided its offices in Tamil Nadu, radical outfit Popular Front of India (PFI) on Friday alleged that the agency was targeting Muslims and trying to link “social” outfits like PFI with terrorism.

The NIA on Thursday conducted searches at 20 locations in Tamil Nadu and Puducherry, including four offices of PFI, in connection with the murder of a PMK worker in Kumbakonam in February last. A number of devices, including 16 mobile phones, 21 SIM cards, three laptops, nine hard discs, seven memory cards, 118 CDs/DVDs, one tab, seven diaries and two PFI banners were seized during the raids, the NIA had said in a statement.

The case pertains to the murder of 41-year-old Ramalingam, a resident of Thiruvidimarudur in Thanjavur district, on February 5, 2019. Talking to the reporters on Friday, Mr. Ismail claimed that PFI was into social services and the educational sector, yet the NIA raided its offices in the State, either to link it with Ramalingam’s killing or the Sri Lankan church blasts.

If NIA continued to “target” Muslims, PFI would resort to legal course of action and “massive” agitation, he added.

Protesting over the manner in which Union Home Minister Amit Shah introduced the resolution to amend Article 370 in the Lok Sabha on Monday, Congress members Hibi Eden and Ramya Haridas tore up a copy of the resolution on the floor of the House. Opposition MPs from the Congress including Sonia Gandhi and Rahul Gandhi, […]

After being denied relief by the Allahabad High Court, the Shahjahanpur law student who has accused former Union Minister Swami Chinmayanand of rape was on September 24 allegedly detained for questioning in an extortion case alleged by him. While there is no confirmation yet on her status from police, footage from Shahjahanpur showed police personnel […]

The Nationalist Congress Party (NCP) on Wednesday named its five members for a joint committee to be formed with the Congress for deciding a ‘common minimum programme’ before their possible alliance with the Shiv Sena for government formation in Maharashtra. NCP’s legislature party head Ajit Pawar, its Maharashtra chief Jayant Patil, party veteran Chhagan Bhujbal, […]