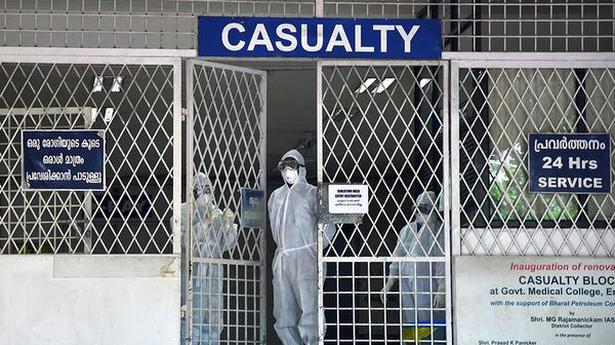 The Kerala police have booked two suspected conspiracy theorists who claimed that the reappearance of the Nipah virus in the State was an “elaborate hoax” by pharmaceutical companies to ratchet up their product sales.

S. Surendran, District Police Chief, Kochi, told The Hindu that the falsehood spread by the accused had threatened public interest at a critical time.

They had also implied that the government was complicit in the “conspiracy” hatched by the private firms. They had attempted to erode the confidence of the public in the government’s attempt to contain the contagion, he said.

The Central Police, Kochi, has booked them on the charge of creating mischief and spreading falsehood in society.

Another senior official said that the police action in Kochi was part of a broader drive to combat false or harmful information regarding the viral outbreak.

It did not apply to credible opinions, criticism, satirical caricatures or mockery of the current situation.

It had flagged up a marked increase in misinformation and alarmist propaganda related to Nipah, prompting Chief Minister Pinarayi Vijayan to warn people on Tuesday against trusting canards spread through the internet.

Investigators had zeroed in on two proponents of naturopathy, who promoted magic cures and quack treatments.

One posted a video of himself eating a mango which he claimed was discarded by a fruit bat to dispel the scientific finding that the mammal could transmit the virus to humans.

The other argued against hospitalising persons suspected of Nipah infection and claimed he could treat the viral affliction without drugs and through dietary adjustments.

Both have an outsize presence on social media and their messaging to their large number of followers was particularly disconcerting to public health authorities.

Authorities had faced a similar predicament during an outbreak of rat fever in 2018 when a set of social media evangelists for alternative medicine urged the public to shun doxycycline, a prophylactic distributed by health authorities to contain the spread of leptospirosis.

In the past, some fringe elements posted scaremongering videos in an attempt to derail the government’s polio immunisation campaign on the false ground that it infringed on their religious beliefs.

Cyber investigators had also come across fearmongering social media posts, urging the public to shun Nipah caregivers, public spaces and not to send children to school.

Maharashtra’s economy grew at an estimated 7.5% in 2018-19, the same pace as the year before it, but growth in the agricultural sector collapsed to a mere 0.4% and crop output shrank by a sharp 8%. With industrial growth also contracting, it was only a sharp 9.2% growth in the Services sector that helped the […]

An FIR has been registered against a television journalist over his report stating that trains would restart, which might have prompted the gathering of migrants in suburban Bandra on Tuesday, a police official said. The accused, Rahul Kulkarni, based in Osmanabad district of Maharashtra, has been detained and police are in the process of bringing […]

In the wake of heavy rains in the city, the Southern Power Distribution Company of Telangana Ltd (TSSPDCL) has cautioned people against accidents involving electricity supply and suggested precautionary measures. Chairman and Managing Director of TSSPDCL G. Raghuma Reddy said they have formed 25 disaster management teams for Greater Hyderabad limits to respond to emergency […]