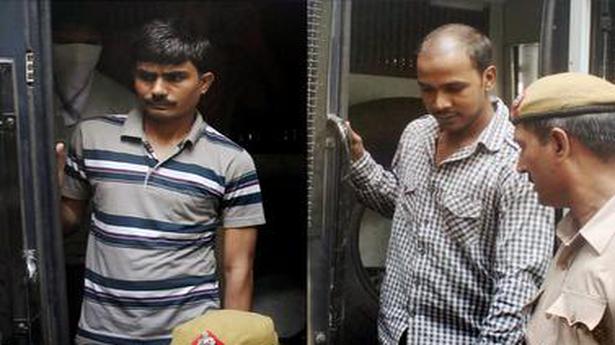 A Delhi court on January 31 postponed the execution of death warrants of the four convicts in the December 16, 2012 gang rape and murder case till further orders.

Additional Sessions Judge Dharmender Rana passed the order on plea by the convicts seeking a stay on their execution on February 1.

During the hearing, Tihar Jail authorities challenged the application to stay the hanging of three convicts — Pawan Kumar Gupta, Vinay Kumar Sharma and Akshay Kumar — saying that only one convict’s plea is pending and the others can be hanged.

Advocate A.P. Singh, representing the convicts, argued that rules dictate that when one convict’s plea is pending the others cannot be hanged.

The fourth person sentenced to death in the case is Mukesh Kumar, whose mercy plea was dismissed by President Ram Nath Kovind on January 17. The Supreme Court had on Wednesday dismissed Mukesh’s plea against the President’s decision.

The court had on January 20 issued death warrants for February 1 against the four convicts — Vinay Sharma (26), Akshay Kumar Singh (31), Mukesh Kumar Singh (32) and Pawan (26) — in the case. The order now stands stayed till further orders.

‘Hopes dashed but will fight till convicts are hanged’

Nirbhaya’s mother Asha Devi said she will continue her fight till the convicts in the 2012 gangrape and murder case are hanged, shortly after a Delhi court postponed the execution of death warrants till further order.

Ms. Devi told reporters her “hopes are dashed” but she will continue her fight till the convicts are hanged.

(with inputs from PTI)

Forty-five days and counting. Nu-Shi Nalini, the chemical tanker which ran aground, may finally be afloat, but the 2,400 metric tonne of naphtha, continues to be a sticking point for the Goa government as getting it safely out of the State continues to be a challenge. Marine Masters, a Netherland-based salvage company, appointed to salvage […]

Refuting Chief Electoral Officer (CEO) Teeka Ram Meena’s finding that bogus voting had taken place in a booth at Pilathara here on April 23, CPI(M) State secretary Kodiyeri Balakrishnan has accused the officer of being partisan. At a press conference here on Tuesday, Mr. Balakrishnan alleged that the CEO was acting as part of a […]

HDK, Congress hit out at Modi for dyslexia remark