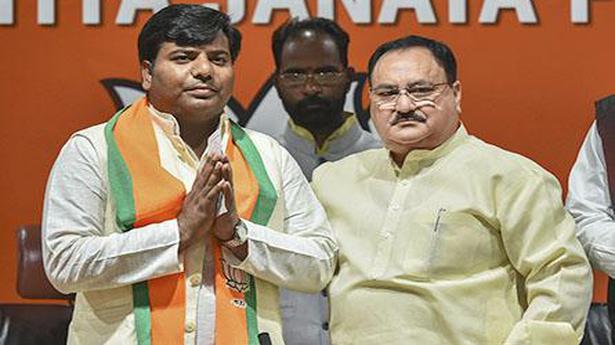 In a fillip to the caste arithmetic of the BJP in Uttar Pradesh, the Nishad Party joined the NDA on Thursday, less than a week after it walked out of the Samajwadi Party-Bahujan Samaj Party alliance on March 29.

Gorakhpur MP Praveen Nishad, who won the seat in a bypoll on an SP ticket in 2018 with BSP support, was also inducted into the BJP. He is the son of Sanjay Nishad, the founder and president of the Nishad Party.

Announcing the tie-up with the BJP in Delhi, Mr. Sanjay Nishad said it was a “natural alliance of Ram Raj and Nishadraj”. A caste icon and mythological ancestor of the Nishads, an OBC riverine community, Nishadraj is believed by Hindus to be the boatman who helped Lord Ram, his wife Sita and brother Lakshman cross the Ganga during exile.

The Nishad Party chief said he hoped respect would be given to all people as part of the ‘Sabka Saath, Sabka Vikas’ agenda of the BJP and Prime Minister Narendra Modi, a dramatic shift in his political tone. Barely 10 days ago, he had resolved to mobilise the “85%” voters (OBC, Dalits and Muslims) against the BJP and had supported the SP and BSP to avoid division of votes.

The exit of the Nishad Party alters the caste balance in Purvanchal and parts of central U.P., where the BJP already enjoys support of the Kurmi-based Apna Dal and the Suheldev Bharatiya Samaj Party of Om Prakash Rajbhar. While Kurmis are a dominant agrarian OBC caste, Rajbhars and Nishads are categorised among the most backward castes.

Stung by the exit of the Nishad Party, the SP on Saturday responded by replacing Mr. Praveen Nishad with another Nishad candidate from Gorakhpur — former Minister Ram Bhual Nishad. There is no announcement yet if the Gorakhpur MP will contest polls on a BJP ticket or defend his seat.

BJP parliamentary board secretary J.P. Nadda, who inducted the Nishad Party into the NDA, said its support would have a big impact in east and central U.P.

Reacting to the tie-up, SP president Akhilesh Yadav said it was a “ghate ka sauda” (loss-making deal) for the BJP. The people of Gorakhpur did not vote to ensure the victory of the MP alone but of the alliance that was behind him, he posted on social media, predicting that the Nishad Party boat was due to sink in the election.

The Angamali-Sabarimala railway project aimed at putting the hill shrine into the railway network has suffered a setback with the Railways deciding to keep the project in abeyance and not infuse fresh funds. The 116-km line, sanctioned in 1997-’98, is one of the 10 stalled rail infrastructure projects of the Southern Railway. “The Railway Board […]

Two days after a Cabinet Minister in the Congress-led Madhya Pradesh government alleged Digvijaya Singh was attempting to destabilise government, two of its MLAs accused Health Minister Tulsiram Silawat of corruption. “Whenever I ask him for help for a nurse or anyone poor, he sends them Indore where his son demands money in exchange for […]

While cooling his heels at an isolation centre in Odisha’s Jajpur district, Mahesh Jena, a 20-year-old migrant worker, still continues to be in a state of disbelief. He has cycled a distance over 1,700 km from Maharashtra to reach his home in Odisha in just seven days after lockdown restrictions snapped all options of using […]