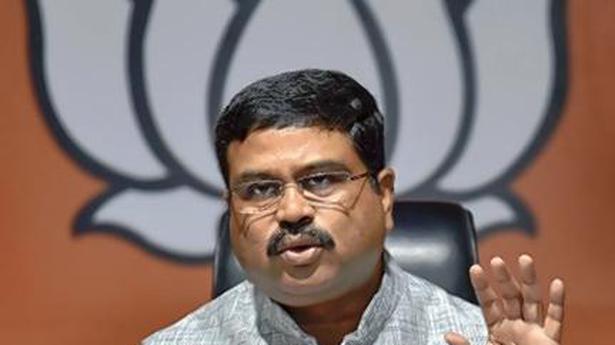 The BJP on Tuesday said that no major Muslim country came out in support of Pakistan after the Modi government ended the special status accorded to Jammu and Kashmir under Article 370.

At a press conference at the BJP headquarters here, Union Minister Dharmendra Pradhan cited his recent visit to three Islamic countries, Saudi Arabia, the UAE and Qatar, to affirm that these nations appreciated India’s stand.

He was answering questions on Pakistan Prime Minister Imran Khan’s visit to the U.S. The press conference was called to speak about the BJP’s month-long exercise to seek people’s support on the decision to dilute Article 370.

“No major Muslim country, including many of Pakistan’s old associates, is with the country [Pakistan]. They consider it not a religious issue but an internal matter of India,” Mr. Pradhan said adding that it was a “pleasant surprise” for him to get this firsthand experience during his visit.

Jal Shakti Minister Gajendra Singh Shekhawat said the BJP’s campaign had received all-round support across the country as the party ended up holding over 600 public events instead of 370 planned earlier. The party held rallies in 34 major cities.

“I can say that this exercise has led to a rise in nationalist feeling and a new sense of national unity has taken shape,” Mr. Shekhawat said. The party held seven programmes in Jammu and Kashmir. One of them was organised in the Valley.

Mr. Pradhan said BJP members, including its top leaders, down to functionaries at the local level, met over five lakh “opinion makers” across the country.

A chartered single-engine plane Cirrus SR22 (VT-VDN) made an emergency landing in the fields of Eradikera village of Bhrahmasamudram mandal of Anantapur district, close to the Karnataka border on Monday morning. The four-seater plane, carrying two persons from Jindal Steel Limited, hit a snag in fuel supply. This forced the pilot to make an emergency […]

Five States together account for 65.4% of COVID-19 deaths in the last 24 hours

The Election Commission is set to announce the schedule for Bihar assembly elections on Friday.The EC has convened a press conference in this regard a Source: thehindu.com Related