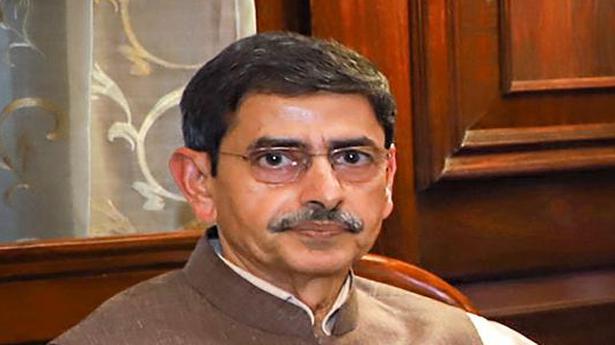 The Centre will conclude the Naga peace process by October 31 and there will be no separate national flag or constitution for the Nagas, interlocutor R.N. Ravi told The Hindu.

Accusing National Socialist Council of Nagaland (Isak-Muivah) [NSCN-IM] of delaying the talks, Mr. Ravi said, “Endless negotiation under the shadow of guns is not acceptable.”

Mr. Ravi said the NSCN-IM, with which the Centre signed a framework agreement on August 3, 2015 to find a solution to the Naga issue, had adopted a “procrastinating attitude to delay the settlement, raising the contentious symbolic issues of separate Naga national flag and constitution.”

Mr. Ravi, who is also Nagaland’s Governor, said the Naga political movement belongs to the Naga people and the civil society groups had given their opinion clearly. He said a “mutually agreed draft comprehensive settlement, including all the substantive issues and competencies, is ready for inking the final agreement”, and it has the blessings of the Church.

“Naga people are represented by their traditional tribal apex bodies, village headmen, civil society groups etc…. they have collectively taken a decision for the first time on one platform. We have a written endorsement from them to go ahead and conclude the peace process,” Mr. Ravi said.

Asked if the peace deal would be signed without the NSCN-IM, Mr. Ravi said, “I would expect that since the Nagas have expressed their voice, the NSCN should heed the voice.”

“The two agreements do not mention any separate flag or constitution for the Nagas… NSCN-IM has been misleading and lying to the people. It only talks of power sharing. I read out the details in front of the civil society groups, they have made up their mind to conclude the process,” Mr. Ravi said.

A statement issued by Mr. Ravi’s office said, “Political maturity and wisdom of the Naga leaders who expressed their overwhelming support in favour of a settlement without any further delay is deeply appreciated. Respecting the Naga people’s wishes, the Government of India is determined to conclude the Peace Process without delay. Endless negotiation under the shadow of guns is not acceptable.”

NSCN-IM has been fighting for ‘Greater Nagaland’ or Nagalim — it wants to extend Nagaland’s borders by including Naga-dominated areas in neighbouring Assam, Manipur and Arunachal Pradesh — to unite 1.2 million Nagas. Centre has said there will be no disintegration of Assam, Arunachal Pradesh and Manipur to merge the Naga inhabited areas with the existing State of Nagaland.

The Campbell aqueduct, where river Krishna splits into two branches, is under flood water and the inflow exceeded seven-and-a-half lakh cusecs on Saturday morning. The aqueduct was inundated for the second time in the past decade, the last time being in 2009 when the inflow was nearly 12 lakh cusecs. According to the available literature, […]

Schools and colleges were closed, offices were shut and vehicles remained largely off roads in Tripura on Thursday amid a 24-hour shutdown call given by the Congress, officials said. Shops were also shut in several areas across the State and many trains were cancelled due to the shutdown, which was called by the Congress in […]