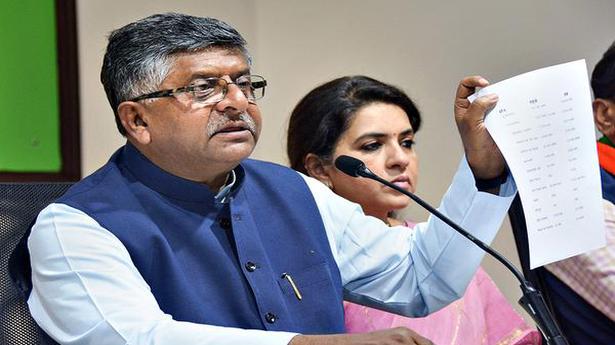 Indications of slowdown notwithstanding, Union Minister Ravi Shankar Prasad on Saturday said three Bollywood movies generating business of ₹120 crore on the October 2 holiday suggested a “sound economy” even as he dubbed “wrong” the NSSO report which had reportedly pegged unemployment rate at a 45-year high in 2017.

Days after the International Monetary Fund (IMF) said the economic slowdown is more pronounced this year in India and Brazil, Mr. Prasad said the measurement was incomplete.

He alleged that some people organised against the government are misleading people over unemployment scenario.

“I was also told that on October 2, observed as one of the national holidays, three Hindi movies garnered ₹120 crore business. Unless the economy is sound in the country how can only three movies collect so much business in a single day?” Mr. Prasad asked in an interaction with reporters in Mumbai after his arrival to campaign for the BJP for the Assembly polls.

The report had generated a lot of political heat, with the then Congress president Rahul Gandhi saying the Modi government had promised two crore jobs, but five years later a “leaked job creation report card” has revealed a “national disaster”.

Earlier, Niti Aayog vice chairman Rajiv Kumar had countered the report saying, “It is not finalised. It is a draft report.”

Mr. Prasad, who holds Law and Justice, Communications and Electronics and Information Technology portfolios, said, “I have given you ten parameters where economy is performing well, but not a single one is reflected in the (NSSO) report. Hence I call it a wrong report.”

The government and its machinery are working for women who seek protection — Union Women and Child Development Minister Smriti Irani sought to send out this message through a video-conference on Wednesday with institutes associated with her Ministry. The appeal comes at a time gender rights activists and the U.N. have called for the need […]

Non-governmental organisations (NGOs) “substantially” financed by the government fall within the ambit of the Right to Information Act, the Supreme Court held in a judgment on Tuesday. A Bench of Justices Deepak Gupta and Aniruddha Bose laid down that NGOs which receive considerable finances from the government or are essentially dependent on the government fall […]