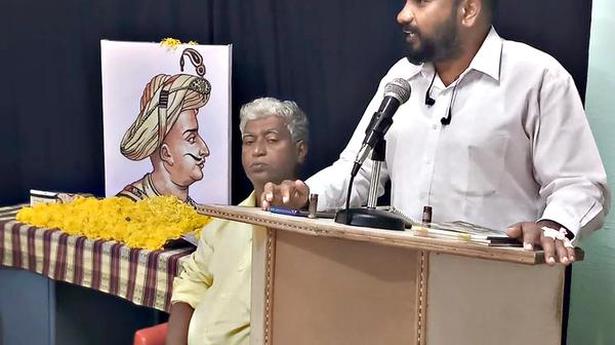 He was delivering a special lecture on Tipu Sultan at a seminar organised by the Tipu Itihasa Samrakshana Vedike to mark his birth anniversary here on Sunday.

“Tipu Sultan has been hailed as a hero by the public in the State. Folk songs provide enough proof to suggest his policies were people-friendly. Many backward class people could own land because of his policies. He spent most of his life on the the war field. However, within his limited time to look after his people, he brought in policies that helped the poor and the downtrodden,” he said. He added that efforts are being made to project him an anti-Hindu ruler and that those who read history with a prejudiced mind find fault with him. “In fact, he was secular in his administration. He had ministers from all religions and took care of structures belonged to all religions,” he said.

Mr. Naveen Kumar said that a committee to spread facts about Tipu’s rule had taken a shape in Hassan. The committee will hold a seminar on Tipu’s rule in Hassan on November 23. Historians will be invited to the event, he added.

The Kerala police on Tuesday expressed the apprehension that forensic experts might find it challenging to trace signs of cyanide poisoning in the long-entombed bodies of victims in the Kozhikode serial murder case. Six persons, including three in a family in the district’s Koodathayi village were allegedly killed between 2002 and 2016. Jolly Joseph, 45, […]