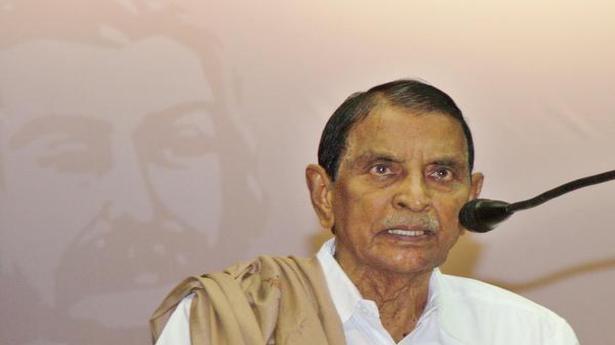 Noted Tamil Scholar and orator Silamboli Su. Chellappan died this morning due to age-related illness at his residence in Kalashetra Colony, Thiruvanmiyur. He was 91.

Mr. Chellappan was born in Siviyampalayam, near Namakkal. He began his career as a mathematics teacher and later obtained a doctorate in Tamil. He held posts such as director of Tamil Development and founder-director of World Tamil Research Centre.

His discourses on the Tamil epic Silapathikaram were very popular. He began these discourses at the age of 24 years and on hearing his speech, veteran Tamil scholar R.P.Sethupillai gave him prefix Silamboli which would go on to stay with him.

Mr. Chellappan propagated the rich values of the epic to the nook and corner of State and abroad for more than 60 years. He has written Silamboli, Silapathikara Sinthanaigal, Sanga Ilakiya Thaen and other books.

The State Government and Tamil fora awarded him in recognition of his contribution to Tamil literature and language. His body will be taken to his native, Namakkal.

He is survived by his wife, a son and two daughters.

It is for the seventh straight day that over a dozen adjoining villages of Baramulla town in north Kashmir have gone without electricity amid the ongoing cold wave. Tractors and private vehicles are new charging points for mobile phones and chargeable lights. Patients and students are the worst sufferers. Khalid Khan, a resident of Heevan […]

Pakistan denies use of its airspace to PM Modi