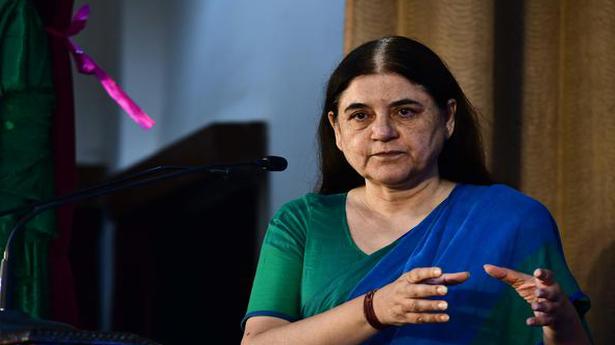 The District Election Officer of Sultanpur on Friday served a notice on Union Minister Maneka Gandhi for her remarks at a political rally in Uttar Pradesh, allegedly threatening Muslims not to get their work done if they did not vote for her. She has been given three days to respond.

Addressing an election rally in Turab Khani village, Ms. Gandhi told Muslims that she was all set to win and that they should vote for her as they would need her help in future.

“I am winning… But if my victory is without support from Muslims, I won’t feel that good. Dil khatta ho jayega (heart will become sour). Then when a Muslim comes to me for work, I think let it be, how does it matter?” Ms. Gandhi had said.

The Union Minister is a BJP candidate from Sultanpur constituency.

Her statement had triggered sharp reaction from the Opposition parties. The Congress spokesperson, Randeep Singh Surjewala, accused her of dividing people in the name of caste and community.

The veiled threat in the speech evoked strong condemnation across the board from social media.

Congress spokesperson Sanjay Jha in a series of tweets, condemned the Minister, saying: “Scandal! Naukri ek sauda hai (employment is a bargain)#BJPS # Maneka Gandhi. Dear Demographic Dividend India, now you know why India has an unemployment jobs crisis. For #BJP providing jobs is a commercial deal; you have to help them first to get a job. A quid pro quo. It is a barter, give & take.”

Actor Swara Bhaskar tweeted, “Literally Sick. Is Maneka Gandhi threatening Muslims? Isn’t this unconstitutional? And criminal? She is admitting that she will abuse her power soon as she in office! @ECISVEEP This must violate something! ”

A video on the once vibrant katib community of Old Delhi’s Urdu Bazaar Source: thehindu.com Related