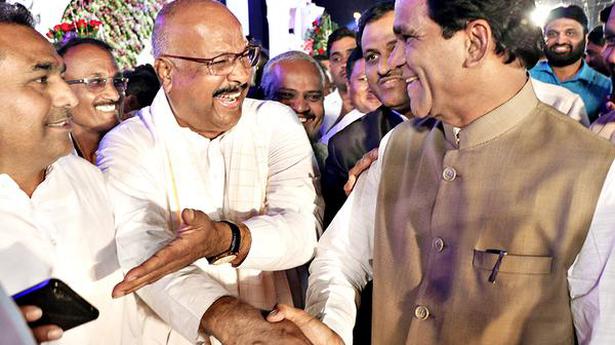 Barely two days after he abruptly exited the Congress, Aurangabad legislator Abdul Sattar on Monday denied reports of him joining the Bharatiya Janata Party (BJP) and claimed that State Congress chief Ashok Chavan has promised him a Lok Sabha ticket for either the Aurangabad or Jalna seat.

If his claim is true, the Congress will have to replace one of its candidates in Aurangabad and Jalna: MLC Subhash Zambad and Vilas Autade respectively.

“Mr. Chavan has been in touch with me since I announced my exit from the Congress… He and other party superiors have assured me that I could contest either the Aurangabad or Jalna constituency,” Mr. Sattar said in Aurangabad.

The Sillod MLA said that as he had announced his intention to contest as an Independent, he would decide on the Congress’s offer at a meeting of his supporters at Aamkhas Maidan on March 29 . “They may get the wrong idea if I eagerly accept an offer from the Congress after exiting the party barely two days ago,” Mr. Sattar said. He denied that his resignation was a pressure tactic to force the party high command to offer him a ticket.

Mr. Sattar, a mainstay of the Congress in Aurangabad and a supporter of Mr. Chavan, was disgruntled that neither he nor his preferred candidate was considered for the Aurangabad seat. His resignation coincided with the leak of an alleged audio clip of Mr. Chavan saying that he too planned to resign from his post.

“It is possible that Mr. Sattar’s resignation was a mere ploy and that he was acting on Mr. Chavan’s instructions, as the latter wishes to pressure the party high command to field his preferred candidates,” an election watcher from Aurangabad said. The observer said the drama hinted at a larger tussle within the Congress between Mr. Chavan and Mukul Wasnik, general secretary and in-charge of the Central Election Committee, over the choice of candidates in Maharashtra.

Following his sudden resignation on Saturday, Mr. Sattar had held a midnight parley with Chief Minister Devendra Fadnavis and senior BJP leader Girish Mahajan, triggering speculation that he may defect to the BJP. At the time, he had said if “Delhi” was not respecting Mr. Chavan’s wishes, a party leader like him had scant hope of “securing justice.”

According to insiders in the Aurangabad Congress unit, in the event he was not given a ticket, Mr. Sattar was eager for the party to field Kannad legislator Harshawardhan Jadhav to take on the Shiv Sena’s Chandrakant Khaire, the Sena-BJP candidate for Aurangabad. Mr. Jadhav, a former Sena leader, is the son-in-law of the BJP’s Maharashtra chief, Raosaheb Danve.

“Mr. Sattar was hoping to deal Mr. Danve a decisive blow in Marathwada by fielding his son-in-law from Aurangabad. However, the party high command did not approve of him or his preferred choice,” said a member of Mr. Sattar’s faction.

Mr. Sattar’s other scheme, to woo Sena leader Arjun Khotkar into the Congress to checkmate Mr. Danve in Jalna, failed as well. Mr. Khotkar, a bitter adversary of Mr. Danve, patched it up with the BJP State president following the intervention of Sena president Uddhav Thackeray and Mr. Fadnavis.

Meanwhile, Mr. Khaire, a four-time MP, faces stiff opposition from the public and local BJP workers, who are unenthusiastic about campaigning for him, party sources said.

Two people who visited China and came to India ten days ago have been kept under medical supervision in the city. Their samples will be sent to Pune for investigation for exposure to the Coronavirus. A bulletin issued stated that six passengers – four Chinese and two Indians – are under house quarantine and are […]

The reservoirs of the Sabarigiri hydro-electric project of the Kerala State Electricity Board have recorded fairly good inflow from the catchment areas during the past 24 hours that ended at 8 a.m on Wednesday, according to board sources at Moozhiyar. The storage position in the Kakki-Anathodu twin reservoirs of the Sabarigiri hydro-electric project has gone […]

Security forces on Tuesday seized improvised explosive devices and a wireless set from a terrorist hideout in Jammu and Kashmir’s Poonch district, officials said. The seizure was made during a search operation that was launched on Sunday following information from villagers about the movement of suspicious people in a forest in Surankote, they said. Seven […]