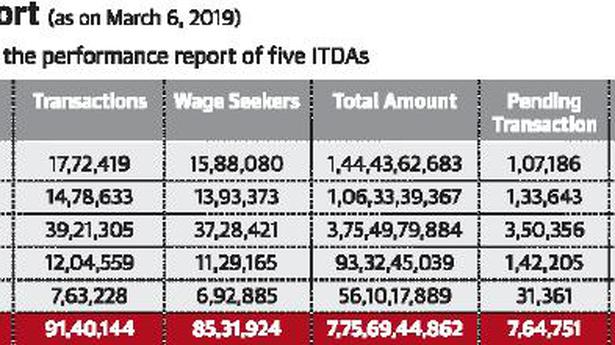 Contrary to claims that Andhra Pradesh is at the forefront in the implementation of the Mahatma Gandhi National Rural Employment Guarantee Act (MGNREGA), there are wide gaps defeating the purpose of the Centrally-sponsored programme.

A team of social entrepreneurs from different organisations is on a State-wide tour to understand the issues of NREGA workers.

“At the end of it, we will come up with a charter of demands and submit it to the authorities on the eve of elections,” said Chakradhar Buddha, a governing body member of Delhi-based NREGA Sangharsh Morcha.

Mr. Buddha, along with K. Venkateswarlu of Upadhi Hami Phone Radio, a programme under which information is disseminated to NREGA workers through phones, R. Bujjibabu of Ambedkar Association, D.G.V. Kumar of Bhasha Charitable Trust and S. Siva of Samalochana Association, all three from Visakhapatnam, started their Upadhi Haami Karmikula Chaitanya Yatra from Ganaparthi village under Munagapaka mandal of Visakhapatnam district on February 25.

They initially focused on the remote tribal hamlets in Vizianagaram, Visakhapatnam and Srikakulam districts.

A glaring anomaly is the fact that though officials want to give work to tribals for the stipulated 100 days, the latter are not inclined due to an inordinate delay in payment of money.

“In Manda panchayat, under Gummalakshmipuram mandal of Vizianagaram district, work has been allotted only for an average of 54 days this year. Of the 50 tribal families at Chaparayavalasa village of Guttur panchayat in Pachipenta mandal, 10 have migrated due to delay in payment for the works they have done,” said Mr. Venkateswarlu. “Their frequent migration deprives their children, who should be either in school or in anganwadi centre, of education,” he added.

The team members talk of violation of Section 16 (1) of the Act that mandates selection of works to be carried out in a village in gram sabhas.

“No gram sabhas are held and workers have no clue about either the works being taken up or even their own payment details,” said Mr. Bujjibabu.

Without their consent, their accounts have been shifted from post offices to banks located far away from their habitations. Many adivasi NREGA workers in Seetampet mandal of Srikakulam district have not received payment for their works for over two years.

“A branch post-master handles payment to workers in 120 villages while a field assistant allots works to 15 villages in the agency area. In this set-up, how can one expect justice to the workers,” wonders Mr. Buddha.

From here, the team is headed to Guntur, Prakasam, Nellore, Chittoor, Kadapa, Anantapur and Kurnool districts where it will study the conditions of rural poor in general.

HC notice to govt. on plea against appointment of N.R. Santosh

The High Court of Karnataka on Tuesday ordered issue of notice to the State government on a PIL questioning the legality of appointing political secretariats to the Chief Minister and challenging the appointment of N.R. Santosh as political secretary to Chief Minister B.S. Yediyurappa. A Division Bench comprising Chief Justice Abhay Shreeniwas Oka and Justice […]

The widening rift within the Kerala Congress (M) shows no signs of healing even as the crucial steering committee meeting of the party to decide its lone Lok Sabha candidate is slated to be held here on Sunday. The last-ditch attempts to placate the party’s working chairman P.J. Joseph, who considers his claim to contest […]

Deceased’s family to get retirement benefits