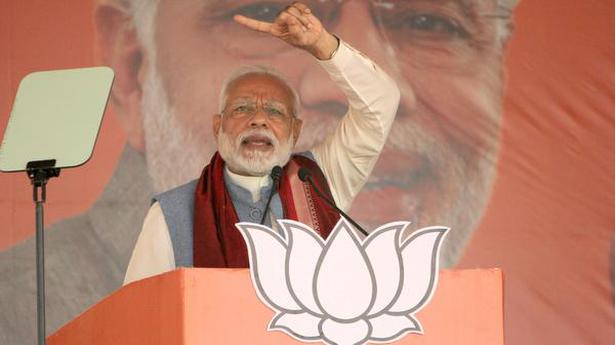 Prime Minister Narendra Modi on Tuesday came down heavily on the Naveen Patnaik government saying the way violence was perpetrated during last 10 to 12 days, Odisha seems to be going West Bengal way.

“During the first two phases of election, I have refrained myself from criticising Naveen Babu. I want an honourable farewell for him since he has served Odisha for such a long period. He should not leave being insulted. So I had maintained silence,” said Mr. Modi addressing a massive public meeting at Kendrapara, 70 km from here.

“But during past 10 to 12 days, the way it was resorted to violence like in West Bengal and some handful of officers turned blind to this spectre of violence, I want to tell Naveen Babu that the handful officers cannot save him. His departure is imminent,” he said.

“People of Odisha are in a mood to bid you (Mr. Patnaik) adieu with folded hand. But now they want to send you off with anger. You cannot escape. People of Odisha have assessed the situation well. They have made up their mind to install a double engine (BJP governments) at New Delhi and Bhubaneswar,” said Mr. Modi.

“Youths who are casting votes for the first time want an Odisha that fits into their aspiration and a 21st century Odisha. They are asking questions as to why has it so happened that so much poverty is prevailing in India’s richest State,” he said.

“The youth who was born around the time when BJD came to power here is now seeking an answer. A generation has grown up, but why migration has not stopped, why new industry has not come, why irrigation has not been extended and why cold-storages have not been set up for conservation of farm produces,” said Mr. Modi.

“Problems are many, but development is not a priority for the government here. Power is the only priority. Elections have taken place year after year and people have backed the government. Those who are in power have taken people for granted,” said PM Modi.

“Change in Odisha is necessary. People need not have to vote out a government for sake of change, but they need to look for a better alternative and vote for BJP,” he said.

The cyclonic storm “Kyarr” is likely to bring very heavy to extremely heavy rains in coastal districts of Ratnagiri and Sindhudurg in Maharashtra in the next 12 hours and also cause strong winds, the Met office said on Friday. The warning was issued this afternoon by the Mumbai centre of the India Meteorological Department (IMD). […]

The Delhi High Court has set aside a decision of the Press Council of India and asked it to reconsider the nomination of a member proposed by the Indian Newspapers Society (INS) for filling up vacancies in the PCI’s 13th term in 2018. The court directed the chairman of PCI to re-consider the eligibility of […]