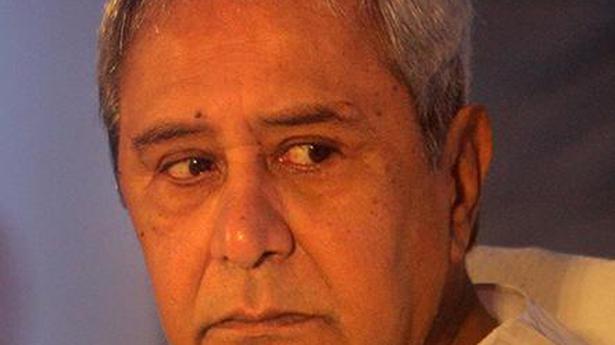 As polling continued in six Lok Sabha and 42 Assembly constituencies in the third phase in Odisha, Chief Minister and Biju Janata Dal (BJD) president Naveen Patnaik cast his vote at a booth under Ekamra Assembly segment of the city on Tuesday.

The Lok Sabha seats where polling was progress since 7 am are Puri, Bhubaneswar, Cuttack, Dhenkanal, Sambalpur and Keonjhar. The 42 Assembly segments came under these Parliamentary constituencies.

A total of 417 candidates are contesting in the third phase polls, and 92.56 lakh voters are expected to exercise their franchise in a total of 7858 booths.

Reports of EVM malfunctioning were received from some booths in the morning hours, but polling resumed after replacing those machines. An average of 7.15% polling of votes was recorded by 10 am.

The BJD president stood in the queue and cast his vote amid tight security arrangements. After casting his vote, Mr. Patnaik exuded confidence that the BJD would perform well in the elections in the State.

Mr. Patnaik is scheduled to visit Balasore and Bhadrak Lok Sabha constituencies later in the day to campaign for party nominees contesting the simultaneous Lok Sabha and Assembly polls.

Prime Minister Narendra Modi is visiting Odisha during the day to address two public meetings at Kendrapara and Balasore.

In fact, the BJD had initially raised objections to the decision of the Election Commission of India (ECI) to hold the polling in Odisha in four phases, instead of two phases as had been done in the past.

Deputy Commissioner R. Venkatesh Kumar has directed the officials to complete ongoing civil works, particularly drinking water and road projects, on time and ensure quality. He was addressing a meeting here on Tuesday. When officials brought to his notice that a road construction work between Saraf Bazaar to Mochiwada had been halted because of the […]

At least seven persons were killed and 15 severely injured when a commercial vehicle carrying passengers went out of control and crashed into an incoming State Road Transportation Corporation bus here on Tuesday afternoon. The vehicle reportedlylost control when one of its tyres burst near Chennaram village in Kondamallepally mandal at around 1.30 pm and […]

UDF leadership tries to put up a united face

The United Democratic Front (UDF) leadership attempted to present a united face on Monday even as a closed-door meeting of its liaison committee sought to heal the differences within the coalition. P.K. Kunhalikutty, general secretary of the Indian Union Muslim League (IUML), led the efforts to take the edge off the bitter factional feuds in […]