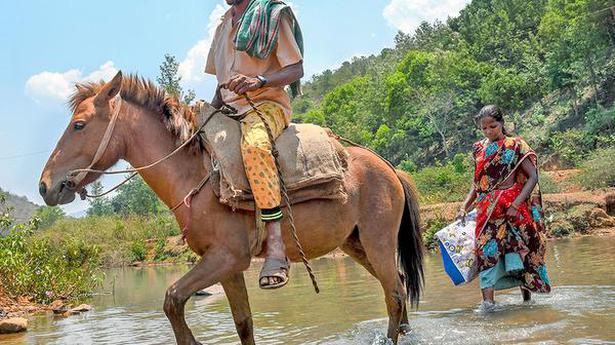 Pandanna rides a horse as his wife China Somma follows him on foot to cast their vote at Boithali, a distance of 10 km from their hamlet in Gandibandha in this remote mandal in Visakhapatnam district.

“We have to cross three hill streams and trek across daunting hilly terrain to reach the nearest polling booth,” Mr. Pandanna told The Hindu at the polling booth.

The couple’s determination to cast their vote is borne out of a fear of losing out on their PDS benefits in case they do not exercise their franchise.

Remote areas in G. Madugula and Pedabayalu mandals in Visakhapatnam district bordering Odisha are home to around 600 horses, which are domesticated by the tribals and are used to transport provisions. Many voters come on horseback to vote at Cheekupanasa near Majigaruvu by coming from Hinjari in Pedabayalu mandal, about 150 km from Visakhapatnam. As there are no bridges in the area, the tribals who depend on rain-fed cultivation for their livelihood have to cross three hill streams to cover a distance of 8 km. Hinjari polling booth has been scrapped this year as it is a Maoist stronghold. As many as 14 booths were merged with other booths for strategic reasons.

A local youth, Kilodu Babu Rao, said they are totally dependent on horses for movement due to poor transport facilities in the area.

Korra Nagaraju from Salebul and Goleri Malleswara Rao, who rent horses, said they charge ₹100 to ₹200 per hour for letting out their steeds.

Veteran writer and translator Chandrakanth Kusnoor died of natural causes in Belagavi on Saturday. He was 90. He suffered from age related illnesses, family sources said. His last rites were conducted in the wee hours of Saturday. A multi faceted personality, he earned significant fame as a writer, translator, novelist, poet, playwright, painter, and art […]

The Jamia Millia Islamia will move court for the registration of an FIR against the Delhi Police in connection with the police action on students in December last year, university officials said on Wednesday. The decision to move court was taken at an emergent Executive council meeting, they said. “An application will be filed very […]