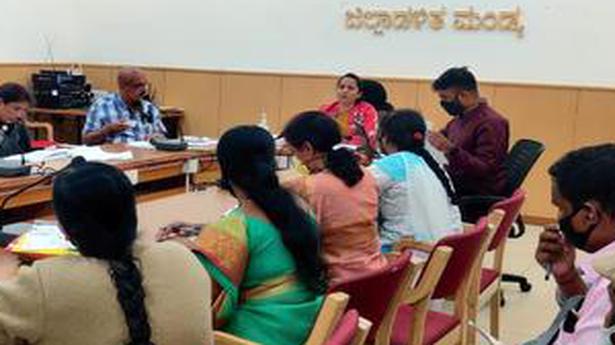 Mandya Additional Deputy Commissioner V.R. Shailaja on Friday said a drive is being launched from November 30 to December 19 in the State for immediate clearance of unresolved applications and appeals submitted under Sakala. The scheme was launched to provide time-bound services to the public under the Karnataka Sakala Services Act, 2011.

At a meeting with officials from various departments in Mandya to brief them about the steps taken in the district in view of the drive, she said 1,025 services had been brought under Sakala in 98 departments. The public needs to be informed and educated about the services available under Sakala and how they could be utilised.

The “Sakala Sapthaha” drive will be carried out department-wise in a bid to complete the process within the time limit.

The public can also bring to the notice of the officials of the respective departments about applications that remain unresolved even after the specified time limit. The officials will be asked to take steps for settling all appeals during the drive. The new applications had to be received and disposed only through Sakala since there are reports of ‘zero’ applications which were not received under Sakala.

Ms. Shailaja said the new applications submitted during the drive had to be cleared within the stipulated period and told the officials to spread awareness about it.

All departments had been told to display boards or banners about the drive on their office premises and also set up helpdesks giving information on the services available under Sakala.

Four teams of officers would be set up for monitoring it, she said, adding that the deputy commissioner will monitor the drive and also visit the offices to verify the steps taken by the departments.

Mysuru Additional Deputy Commissioner B.S. Manjunathaswamy said one nodal officer had been appointed in each department coming under Sakala for clearing the pending applications.

He told a video conference organised by Sakala Mission Additional Director B.R. Manjula in Bengaluru on Friday that 9,51,757 out of 9,52,074 applications had been cleared under Sakala in Mysuru district. The remaining 317 applications would be cleared soon, he added.

The State government has set a target of modernising 15,715 schools in the State under the Nadu-Nedu programme. Besides, smart TVs would be provided in each school for digital teaching. The government would also introduce English as a medium of instruction from Class 1 to Class 6 from the next academic year, said Chief Minister […]

UoM to implement NEP from next year