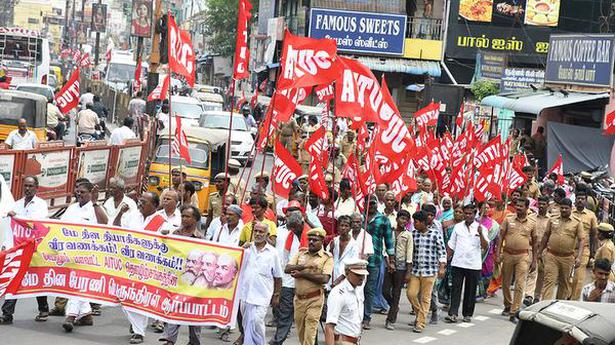 On the occasion of May Day, members of the All India Trade Union Congress (AITUC) on Wednesday staged a demonstration near Anna Kalaiarangam in Vellore to highlight their grievances.

Earlier, the members took out a procession from the new bus stand and reached the venue, covering about two km.

Their demands include scrapping anti-labour policies and initiating genuine labour welfare measures. According to the members, each one of them should get a monthly wage of ₹18,000 and those who attain the superannuation age of 58 should get a minimum pension of ₹6,000 per month.

Contract-basis appointments, outsourcing and fixed term employment should be abolished to give job security to employees, who work till their retirement, speakers at the demonstration said.

A mock drill to check alertness of different agencies to bomb threats was carried out at Christian Medical College Hospital in Vellore on Wednesday. A Bomb Detection and Disposal Squad (BDDS) along with the personnel from the Vellore Police conducted checks on the movement of patients and verified the documents produced by them. Agencies connected […]

Senior Congress leader P Chidambaram on Thursday said party workers must believe that the BJP can be defeated in elections as calm and quiet patriotism can defeat muscular nationalism. Taking a swipe at the BJP, Mr. Chidambaram, who is in ED custody in a corruption case, said that miracles can happen if people shed their […]

The Andhra Pradesh Cabinet is scheduled to meet at 11 a.m. today with the report submitted by retired IAS officer G.N. Rao-led committee on decentralisation as the primary agenda. The expert panel recommended that the State government should develop Amaravati, Visakhapatnam and Kurnool as the legislative, executive and judicial capital cities respectively instead of pooling […]