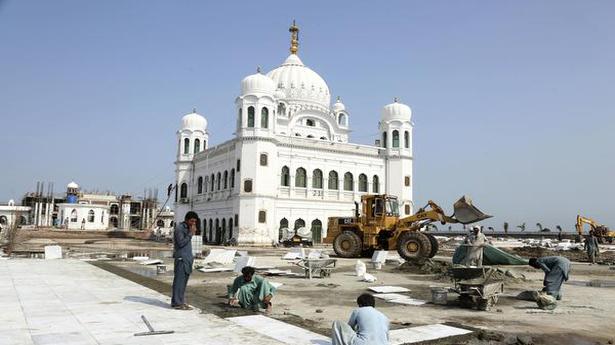 The online registration of devotees visiting Gurdwara Darbar Sahib Kartarpur could not be started on October 20 as India and Pakistan have not reached consensus on a number of issues, including Islamabad’s insistence of charging $20 from each pilgrim, officials said.

India and Pakistan were supposed to sign a pact on October 19 on a few unresolved issues of the pilgrimage, but that has not happened.

“Since some issues are yet to be resolved, the online registration for the Kartarpur pilgrimage could not be started on Sunday,” an official privy to the development said.

Key unresolved issues include Pakistan’s insistence of charging $20 from each pilgrim and the timing of the pilgrimage every day (first entry and last exit time).

On October 16, Chairman of the Land Ports Authority of India and Additional Secretary in the Ministry of Home Affairs Govind Mohan had said the online registration for pilgrims visiting Gurdwara Darbar Sahib Kartarpur is expected to commence on October 20, provided a pact is signed on remaining issues.

India had asked Pakistan to reconsider the decision on charging $20 per pilgrim. India has also asked for allowing 10,000 pilgrims on special occasions and for an Indian protocol officer to accompany the delegation that visits Kartarpur everyday.

Pakistan is yet to respond to India’s requests, the official said.

Last month, India and Pakistan agreed on visa-free travel of Indian pilgrims to Gurdwara Darbar Sahib using the Kartarpur corridor. Pilgrims will only have to carry their passports to visit the revered gurdwara in Pakistan.

Persons of Indian origin holding OCI (Overseas Citizenship of India) card too can visit the gurdwara using the Kartarpur corridor.

It was also decided that 5,000 pilgrims can visit the shrine everyday and that additional pilgrims will be allowed on special occasions, subject to capacity expansion of facilities by the Pakistan side.

India and Pakistan have also decided that the corridor will be operational throughout the year and seven days a week and that pilgrims will have a choice to visit it individually or in groups.

Bridge over the Budhi Ravi channel

Both sides agreed to build a bridge over the Budhi Ravi channel near the border crossing point. Pending the construction of the bridge on the Pakistan side, both parties agreed to the crossing point coordinates of the temporary service road.

India has constructed a four-lane highway in Dera Baba Nanak in Gurdaspur district in Punjab connecting the ‘zero point’ for onward journey to Pakistan.

A total of 55 immigration counters are being set up at the passenger terminal.

The corridor will connect the Dera Baba Nanak shrine in India’s Punjab with the gurdwara at Kartarpur, just about four kilometres from the international border, located at Shakargarh in Narowal district of Pakistan’s Punjab province.

Guru Nanak Dev, the founder of Sikhism, had spent more than 18 years at the Kartarpur gurdwara, located on the banks of the river Ravi.

India and Pakistan had planned to open the corridor before the year-long celebrations to mark the 550th birth anniversary of Guru Nanak Dev beginning next month.

In November 2018, India and Pakistan had agreed to set up the border crossing linking Gurdwara Darbar Sahib in Kartarpur, the final resting place of Guru Nanak Dev, to Dera Baba Nanak.

The foundation stone for the Kartarpur corridor was laid in Punjab’s Gurdaspur district by Vice President M. Venkaiah Naidu in November last year.

Threatening tribal people and demanding rice and other consumables from them and asking them to join Maoist organisations are some of the offences the Kerala police have found suitable to invoke the provisions of the Unlawful Activities (Prevention) Act (UAPA) in Kerala during the last one year. In another instance, the police invoked the Act […]

Private airliner GoAir on Thursday announced the start of daily to-and-fro flight connecting Bengaluru and Indore from December 20. An airline official said besides on this route, one to-and-fro daily flight will be operated on the Indore-Delhi and Indore-Ahmedabad routes also from December 20. The airline is also considering the launch of new flights from […]

Not enough evidence against me, Shivakumar tells Delhi HC

Congress leader D.K. Shivakumar, whose judicial custody in connection with a money-laundering case has been extended till October 25, told the High Court of Delhi that the case was a result of political rivalry and there was not enough evidence against him. The court was hearing his bail plea. Mr. Shivakumar’s counsel also sought relief […]