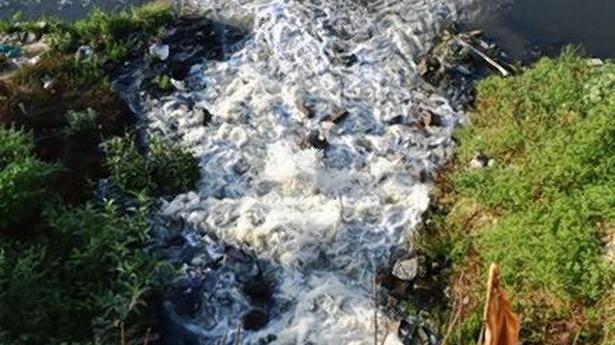 The National Democratic Alliance government has only finished 10 of the 100 sewage infrastructure projects commissioned after 2015 under the Namami Gange mission, according to records.

Commissioning of sewage treatment plants (STP) and laying sewer lines are at the heart of the mission to clean the Ganga. Nearly ₹23,000 crore has been sanctioned of the ₹28,000 crore outlay for sewage management work. River-front development, cleaning ghats and removing trash from the river — the cosmetic side of the mission — make up about for ₹1,200 crore of the mission outlay.

For instance, as of March 31, 27 of the 37 completed STP projects and sewer infrastructure were those commissioned before 2015, says a report on the National Mission for Clean Ganga (NMCG) website.

Uttar Pradesh, responsible for about three-fourths of the inadequately treated industrial waste and municipal sewage, had 18 pre-2015 STP and sewage infrastructure projects commissioned. Only 12 of these have been completed, and only 1 — of the 33 projects commissioned after 2015 at the cost of ₹8,000 crore — has been wrapped up, records show.

Making the Ganga pristine was one of the claims of the Narendra Modi government and this was followed up by sanctioning ₹20,000 crore for the NMCG.

As of March — the latest figures available — slightly over ₹28,000 crore has been sanctioned for various projects but only about ₹6,700 crore (about 25%) has been spent. Last March, the ratio was about 20%. The incomplete projects are reflected in the river quality. None of the towns through which the Ganga courses through has water fit for bathing or drinking, according to water monitoring reports by the State and Central Pollution Control Board.

Rajiv Ranjan Mishra, Director-General, NMCG, said it was only after August 2016 that the NMCG got the necessary independence and authority to commission projects quickly, he explained.

“Most of the major projects we have sanctioned have been in 2017 and 2018 and several of them will come online (and translate into improved water quality) by 2019 and early 2020. We have also followed a new model of having a single private operator take care of all the infrastructure works of a city (to improve efficiency) and implemented the Hybrid Annuity Model (HAM) in awarding tenders to STP and infrastructure developers,” he told The Hindu. About 65 projects were “under process” and Mr. Mishra said they would have shorter gestation times than in the GAP-1 and GAP-2 era.

The HAM, inspired from the prevalent practice of developing highways in India, has 40% of the capital cost of the project is paid by the government during the construction phase of the project. The remaining capital investment on the project, the cost of operations and maintenance of STP are paid over a period of 15 years as quarterly instalments, subject to achieving performance standards.

A six-year-old boy in Mizoram has won the Internet after his photo with a dead chick in one hand and ₹10 in the other was posted on social media. The boy, identified as Derek C. Lalchhanhima of Sairang near Aizawl, had accidentally run over a neighbour’s chick with his bicycle a couple of days ago. […]

Forest Minister Satish Jarkiholi’s supposed opposition to Energy Minister D.K. Shivakumar supervising the elections in North Karnataka, yet again, underlines the manner in which the family bands together, irrespective of their political opinions, when their “territorial authority” is questioned. His brother Ramesh Jarkiholi, who has now distanced himself from the Congress and is said to […]