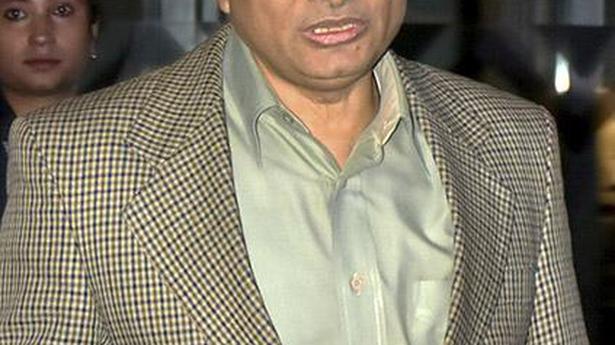 The CBI on Thursday clarified that it is seeking lifting of protection granted to former Kolkata Police Commissioner Rajeev Kumar by the Supreme Court on February 8 and not permission for his “custodial interrogation” in connection with its probe into the Saradha Ponzi scam.

A Bench led by Chief Justice of India Ranjan Gogoi had in February 2019 granted a stay on any “coercive action” against Mr. Kumar provided he cooperate with the agency during a questioning session scheduled in Shillong.

Appearing for the CBI, Solicitor General Tushar Mehta argued that Mr. Kumar had met the agency’s queries on the alleged suppression of crucial evidence in the case like call data records with evasive or “arrogant” answers.

Mr. Mehta dismissed submissions made by senior advocate Indira Jaising, appearing for Mr. Kumar, that her client was being targeted as “a castle built in the air”. Mr. Kumar claimed that the allegations raised against him in connection with the multi-core Saradha chit fund scam was part of a “larger conspiracy” by two prominent Bharatiya Janata Party leaders, Mukul Roy and Kailash Vijayvargiya.

At the end of the hearing, the Bench reserved the case for orders.

Mr. Mehta said the CBI has been asking for the complete evidence since August 2014, after the court transferred the case from the West Bengal government-appointed SIT of which Mr. Kumar was the functional head. The CBI has been making consistent efforts for Mr. Kumar to cooperate in the probe for the past five years, and this has not been a recent development as is portrayed by his lawyers.

“The impression created that we have been hounding him has to be removed,” Mr. Mehta urged.

The CJI said the data was collected through multiple agencies, indicating that the delay from the SIT’s side may have been due to the time taken to gather the evidence.

The West Bengal government has told the Supreme Court that the CBI plea against Mr. Kumar is merely a “political game”.

“The whole episode is a political game to keep the pot boiling and to paint people black,” senior advocate A.M. Singhvi, appearing for the West Bengal establishment, had submitted.

The CBI has alleged that both the “big Ponzi” Saradha and Rose Valley companies were “flourishing” when Mr. Kumar was the Commissioner of Police at Bidhan Nagar Police Commisionerate from 2012 to 2015.

While the investigation was being done by the SIT, “crucial original, primary and fundamental evidence” such as laptops, mobile phones, etc. were handed back to the main accused in the Saradha scam case by the I.O. of the West Bengal Police working under his direct supervision, the CBI alleged.

₹200-crore revenue loss for TDB due to lockdown

The Samajwadi Party (SP) has moved an application seeking the disqualification of Shivpal Singh Yadav from the Uttar Pradesh Assembly under the anti-defection law. Shivpal Yadav, the estranged uncle of SP president Akhilesh Yadav, was elected from the Jaswantnagar Assembly constituency in the 2017 State elections. He floated a new party Pragatisheel Samajwadi Party (Lohia) […]