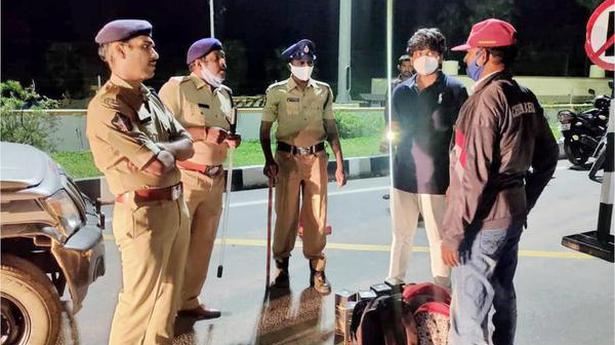 As part of ‘Operation Nigha’, the officials of the Special Enforcement Bureau (SEB) and the police have been conducting raids since Saturday night on sand, liquor and ganja smuggling, and arrack manufacturing units, besides checking the vehicles at the borders.

“About 100 teams of the SEB and police personnel of the districts concerned, and other officers are participating in the drive. They have seized liquor, ganja and sand worth lakhs of rupees,” said Mr. Brijlal.

The raids were being conducted under the supervision of DGP D. Gautam Sawang, who is also the Ex Officio Principal Secretary of SEB, to check illegal liquor, sand, gutkha, ganja and the banned online games, said SEB Director P.H.D. Ramakrishna.

As part of the operation, vehicles coming from other States were checked. The police conducted raids in villages, mangrove forests, island villages and some lodges. The raids would continue, he said. “We are verifying the movements of habitual offenders. Vigil has been mounted on online gambling, cricket betting and other banned games,” Mr. Ramakrishna said.

SEB ex officio additional directors and their staff were participating in the raids, he added.

TIRUNELVELI After struggling for more than four hours, Forest Department employees attached to Kalakkad–Mundanthurai Tiger Reserve’s Kalakkad Division rescued a sloth bear that accidentally fell into an open farm well with a short parapet at Singikulam near Kalakkad in the district on Monday morning. The bear, which is believed to be one among the eight […]