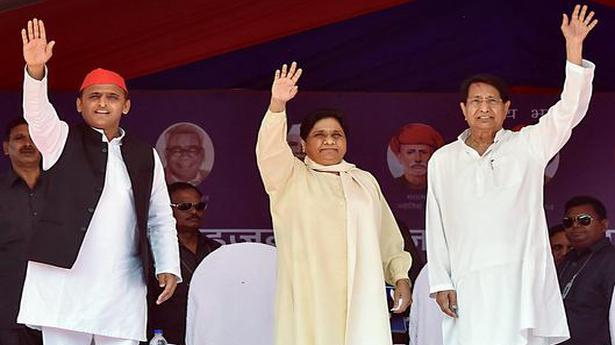 Samajwadi Party chief Akhilesh Yadav on Thursday exuded confidence that the SP-BSP-RLD alliance in Uttar Pradesh will give a new Prime Minister to the country.

He was addressing a joint rally here with Bahujan Samaj Party chief Mayawati and Rashtriya Lok Dal president Ajit Singh. “This alliance will give a new Prime Minister to the country,” Mr. Yadav said.

The alliance has been formed with an aim to ensure social justice and take the ideals of B.R. Ambedkar, Ram Manohar Lohia, Kanshiram and ‘Netaji’ (Mulayam Singh Yadav) forward, the SP chief said.

Lashing out at the BJP, Ms. Mayawati said this Lok Sabha election will see the end of those who chant “NaMo, NaMo”. Prime Minister Narendra Modi is often referred to as ‘NaMo’ by his supporters.

“This election will pave the way for those who chant Jai Bheem. Seeing your response it appears you are going to ensure the victory of the alliance candidates,” she said.

Dimple Yadav, the sitting SP MP from Kannauj and wife of Mr. Yadav, is seeking re-election from the seat as the joint candidate of the SP-BSP-RLD alliance.

Ms. Mayawati reminded the electorate that the Congress did not implement the Mandal Commission report when it was in power.

Hitting out at the BJP government at the Centre, she alleged that it paid lip service to the poor, downtrodden, youth and farmers by making lofty promises and not fulfilling them.

Slamming Prime Minister Modi’s ‘chowkidar’ (watchman) title, Ms. Mayawati said: “Chowkidari ki nataakbaazi nahin chalegi (the drama of chowkidari will not work).” Due to its “communal and faulty economic policies”, the BJP will be ousted in the Lok Sabha polls, she added.

“In the last election, PM Modi promised acche din (better days) but people, including the poor, youths, Dalits, OBC, Mulsims, are facing a difficulty time… The BJP’s casteist approach, like the Congress, on reservation and quota for backward classes has demoralised the people,” she said.

No provision has been made for reservation in private sector jobs for such communities, the BSP chief said.

The 20th edition of The Hindu Young World Quiz will be held at Sharnbasva Centenary Hall, Appa Public School campus, here on March 5. The event will be conducted in two categories. Students of classes 4, 5, and 6 will compete for the junior category, and those of classes 7, 8, and 9 will take […]

No one can dislodge the govt., says Thambi Durai

AIADMK senior leader and Lok Sabha Deputy Speaker M. Thambi Durai said no one can destabilise or dislodge the (AIADMK) government. When asked about AMMK leader T.T.V. Dhinakaran’s remarks that the government would be sent home after May 23, Mr. Thambi Durai asserted that the ‘Amma government’ would complete its full five-year term. In a […]

The four-day-old baby whose mother Gudimalla Sona died of suspected dengue after giving birth was given single donor platelets for the second time in as many days at the private hospital in Mancherial where he is being taken care of. Mancherial District Medical and Health Officer A. Bhishma told The Hindu on Saturday that the […]