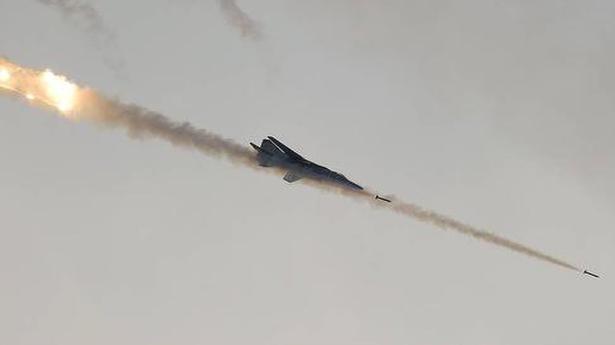 Opposition leaders hit out at the government on Monday over claims on the number of terrorists killed in the Balakot air strike by the Indian Air Force (IAF). At an election rally in Ahmedabad, BJP President Amit Shah had claimed that more than 250 terrorists were killed in the air strike on a terrorist training camp last week.

“300 terrorist dead, Yes or No? What was the purpose then? Were you uprooting terrorist or trees? Was it an election gimmick? Deceit possesses our land in guise of fighting a foreign enemy. Stop politicising the army, it is as sacred as the state,” Punjab minister Navjot Singh Sidhu‏ said in a tweet.

Former Finance Minister P. Chidambaram too questioned the claims and said as a proud citizen he is prepared to believe the government but “if we want the world to believe, government must make the effort, not indulge in Opposition-bashing.”

“IAF Vice Air Marshal declined to comment on casualties. MEA statement said there were no civilian or military casualties. So, who put out the number of casualties as 300-350?,” he said on twitter.

He also questioned as to why Prime Minister Narendra Modi was silent about the air strike. Stating that Congress President Rahul Gandhi was the first to salute the IAF for its splendid achievement, he questioned, “Why has Mr. Modi forgotten that?”

Talking to the media in Coimbatore on Monday, Air Chief Marshal Dhanoa said the statement on causalities will be made by the government. “IAF is not in a position to clarify on how many people were there. We don’t count human casualties, we count what targets have we hit or not hit,” he said.

The Supreme Court has asked the Registrar General of the Patna High Court to verify an “inordinate delay” of 733 days in uploading a judgment on the h Source: thehindu.com Related

The Amma Makkal Munnetra Kazhagam (AMMK) will seek the support of the DMK in the Assembly to overthrow the AIADMK government, the party’s propaganda secretary, Thanga Tamilselvan, said here on Tuesday. Speaking to reporters, he said that when the counting of votes ends on the evening of May 23, the end of the AIADMK government […]

The Enforcement Directorate has provisionally attached properties worth ₹4.67 crore of of Asadullah Biswas in a counterfeit currency case. The action has been taken on the basis of an FIR registered by the National Investigation Agency under the Unlawful Activities (Prevention) Act. During the money laundering probe, 34 FIRs, 27 charge sheets and one prosecution […]