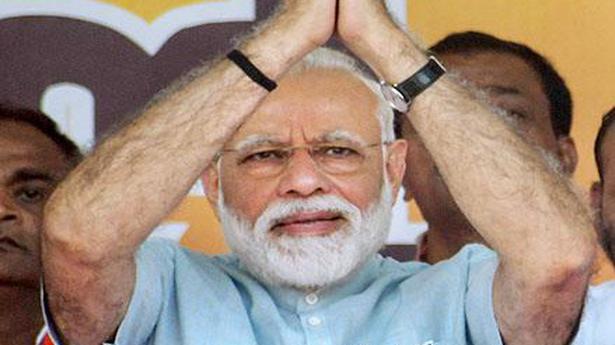 On the 39th foundation day of the Bharatiya Janata Party Saturday, Prime Minister Narendra Modi expressed confidence that its workers would be working day and night to ensure that the party and its allies are “blessed” by people in the Lok Sabha polls. In his tweets, he said the BJP was born with an unwavering commitment to serve society and take the nation to new heights, and that it has become India’s preferred party.

“The BJP stands tall due to its democratic ethos and patriotic zeal. This is a party that is always on the ground, at the forefront of helping fellow Indians. Our development work has endeared the party to all sections of society, across the length and breadth of India,” Mr. Modi said.

“I am confident that the entire family of BJP Karyakartas would be working day and night to ensure that our party and our allies are blessed yet again by the people of India. In the last 5 years lots have been done and we want to do much more for the country,” he added.

On the occasion, BJP president Amit Shah called upon party workers to put in an “untiring effort” to build a new India under Mr. Modi.

Mr. Modi also put out a short video featuring speeches of party’s founders, Atal Bihari Vajpayee and L K Advani, besides those of him and Shah.

The BJP was founded in 1980 by leaders of the erstwhile Jana Sangh, which had merged in 1977 with Janata Party — an amalgam of several anti-Congress parties.

In the first Lok Sabha polls it fought in 1984, the BJP won only two seats but has since gone from strength to strength, winning a majority of seats for the first time in 2014.

For this Indian doctor, classes in China go on as usual

It was around mid-January that Dr. Anushri Mukhopadhyay, a Goa-based ENT (ear, nose and throat) surgeon, who had taken up a teaching assignment at a Chinese university only months earlier, returned home on a scheduled break. By then, COVID-19 cases had begun to be reported from China but it was still not thought of as […]

Cyclone Fani, a severe cyclonic storm, made landfall impact on Friday, May 3, 2019 around 8.00 a.m. south of Puri on the Odisha coast. The entire process is expected to happen over the next two hours. The Odisha government on Thursday evacuated over 11 lakh people from low-lying areas in 15 districts. MHA Control Room […]

Coronavirus | In Howrah, BJP to distribute homeopathic drug for immunity-building