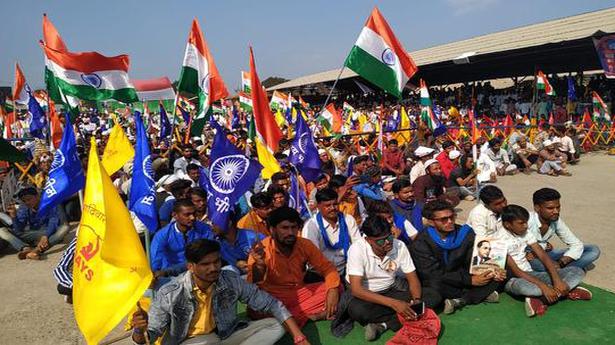 More than 30,000 Dalits and Adivasis held a dharna opposing the Citizenship (Amendment) Act (CAA) at the anaj mandi (grain market) in Khargone in southern Madhya Pradesh on Tuesday, urging the Centre to withdraw the contentious law and asking the State government to pass a resolution against it.

“Should we leave the fate of our citizenship in the hands of a government that is casteist and communal?” asked Madhuri Krishnaswamy of the Jagrit Adivasi Dalit Sangathan, addressing the protest rally. “The Centre is inflicting attack after attack on its citizens. Is this what we choose a government for?”

On the second day of protests against the law, the proposed nationwide implementation of the National Register of Citizens (NRC) and the National Population Register (NPR) in Madhya Pradesh’s Nimar region, the Dalit and Advisasi groups made clear that they were in no mood to relent.

“Until the NPR and the NRC is stopped in its tracks, our movement will continue to grow stronger,” said Ms. Krishnaswamy.

Addressing the protesters, Swaraj India president Yogendra Yadav said, “Any other Prime Minister would be proud to see the Constitution’s Preamble being read out and the Tricolour being carried in protests across the country today, but unfortunately, not our Prime Minister.”

Sunil Astay of the Bhim Army said Dalits would stand alongside Adivasis throughout the movement. “We will stand shoulder-to-shoulder with our brothers.”

Elaborating on the plight of those left out of the NRC in Assam, social worker Harsh Mander said several clerical errors, such as spelling mistakes, had sent citizens straight to detention centres. He also reminded the protesters of the heritage of peace and harmony that people across the country shared and which needed to be preserved.

Gyaani Bai, a protester said, “The BJP government at the Centre should be ashamed. After begging us for votes and saying Har har Modi, Ghar ghar Modi, they are asking for proof of citizenship.”

Contending that while the party had got votes from the people, but had only worked for the benefit of corporates, she asserted, “As for us, you only seek to divide us in the name of caste and religion; there is nothing greater than humanity, and we do not want this law”.

Adventure sports back to add excitement to Dasara festivities

Adventure sports are part of Dasara festivities this year once more with a slew of adrenaline-pumping events on the line-up. While water sports at Varuna lake on the outskirts are a regular affair and often promoted during Dasara with special discount packages, it is managed by a private enterprise. Hence, the organising committee decided to […]

With no money set aside in Budget, Shaadi Bhagya scheme wound up

The Bidaai-Shaadi Bhagya scheme, which was started by the Siddaramaiah-led government in 2013, has come to an end, with the 2020-21 State Budget making no financial provision to the scheme. The Minorities Department has asked all its field offices not to accept new applications with immediate effect. While the Budget was presented on Thursday, the […]

No room for complacency at this stage of epidemic, say experts Source: thehindu.com Related