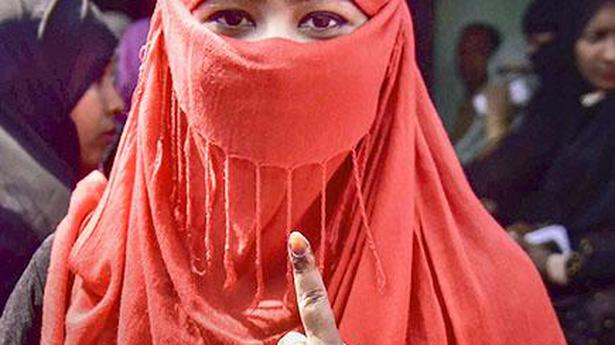 Six constituencies in the Northeast – five in Assam and one in Manipur – on Thursday recorded an average 73.8% voting that was largely peaceful barring a stray incident of violence in Manipur.

The five constituencies in Assam – Autonomous District, Karimganj, Mangaldoi, Nowgong, and Silchar – together had a voter turnout of 73.32% while the Inner Manipur seat clocked 74.3% by 5 p.m.. The figure is expected to increase in both States.

Firing in the air

Central Reserve Police Force personnel fired in the air and resorted to baton charge to disperse a mob that stormed a polling station in Imphal. The violence broke out at Kyamgei Muslim Makha Leikai polling station after an EVM malfunctioned.

Men and women, angry after a long wait, stormed the polling station and destroyed an EVM and a VVPAT machine. A video of the incident showed an agitated mob armed with bamboo sticks and stones barging into the booth. A stone reportedly hit a polling official on the head.

The CRPF personnel soon took control of the situation though voting at the booth was suspended. Re-polling is likely to be ordered there.

There were no reports of violence in Assam though chaos prevailed at a polling station in Karimganj in the morning. Security personnel restored normalcy by using batons lightly to control a section of voters who were angry after an EVM malfunctioned.

In north-central Assam’s Mangaldoi, a woman identified as Bharati Kakati died after casting her vote. She collapsed at the polling station and was rushed to a hospital but died on the way.

In the third and last phase polls in Northeast on April 23, polling will be held in four constituencies of Assam – Guwahati, Barpeta, Dhubri, and Kokrajhar – and Tripura East in Tripura.

CAA: There is nobody to have a dialogue with, says Anurag Kashyap

Filmmaker and writer Anurag Kashyap admits to being perpetually angry and “super frustrated” of late. More so the morning after Home Ministry’s notification of CAA coming into effect.“How do you fight a bully like this?” he asks rhetorically, as we sit down for an interview with one of Bollywood’s loudest dissenters against the government. So […]

A forest fire has triggered several landmine blasts along the Line of Control (LoC) in Jammu and Kashmir’s Poonch district, officials said on Thursday. The fire broke out across the LoC and spread to this side of the border, resulting in mine blasts on Wednesday night, they said. However, there was no loss of life […]

The Kerala Police have bagged three SKOCH awards for its various initiatives in tackling crime and enhancing crowd control. The feted initiatives included the Virtual Q facility for Sabarimala devotees to enable them to book their darshan timings in advance. The facility has brought down crowding at the pilgrim centre, helping the police to streamline […]