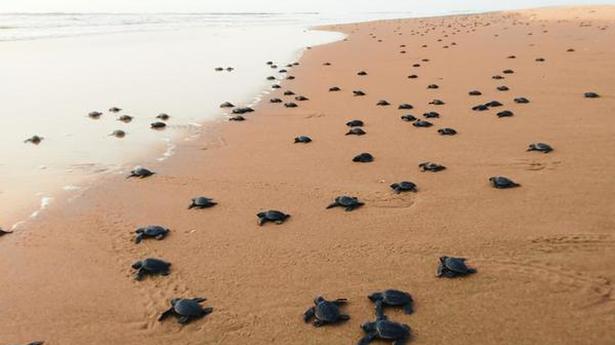 The idyllic Kalam Island off the Odisha coast has become lively with lakhs of baby Olive Ridley turtles crawling towards the Bay of Bengal after emerging from eggshells.

“We are expecting the process to continue for another two days as 4.5 lakh turtles had arrived at beaches under Gahirmatha Marine Sanctuary to lay eggs this year. We hope millions of baby turtles would make their way into the sea in the next two days,” said Bimal Prasanna Acharya, Divisional Forest Officer of Rajnagar Mangrove (Wildlife) Forest Division.

The unmanned island, located close to the Wheeler’s Island defence test range centre, a prohibited territory, is one of the largest rookeries in the world. Except forest department officials, no one has had the chance to witness the spectacular sight. After breaking the eggshells, the baby turtles crawled seawards almost immediately without their mothers. Eggs laid by turtles in March were incubated under natural process.

No one can dislodge the govt., says Thambi Durai

AIADMK senior leader and Lok Sabha Deputy Speaker M. Thambi Durai said no one can destabilise or dislodge the (AIADMK) government. When asked about AMMK leader T.T.V. Dhinakaran’s remarks that the government would be sent home after May 23, Mr. Thambi Durai asserted that the ‘Amma government’ would complete its full five-year term. In a […]

The Shiv Sena welcomed another leader from the Nationalist Congress Party (NCP) into its fold on Friday. After resigning as MLA in the morning, former NCP State president Bhaskar Jadhav joined the Sena in presence of party chief Uddhav Thackeray at the latter’s residence, Matoshri, in Mumbai. “I have no grouse with anyone. I was […]