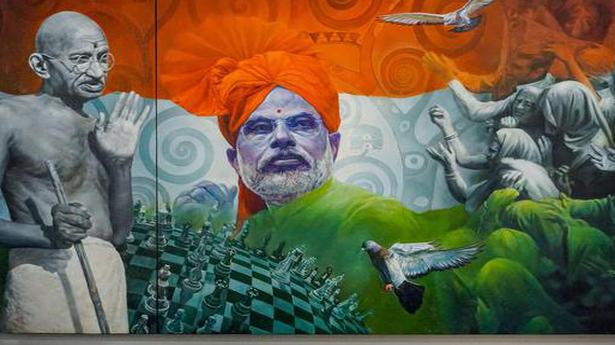 The e-auctioning of mementos received by Prime Minister Narendra Modi, which was organised by the Culture Ministry, drew to a close on Friday, with the highest bid of ₹25 lakh for a painting featuring the PM and Mahatma Gandhi, the government said. The proceeds from the e-auction will be donated towards the Namami Gange Mission.

The Culture Ministry organised the e-auction from September 14 to sell 2,772 mementos gifted to the Prime Minister.

The items were on display at the National Gallery of Modern Art (NGMA) here and included memorabilia, paintings, sculptures, shawls, jackets and traditional musical instruments.

The e-auction was to be held till October 3. However, a decision was taken to extend it for three weeks. As of today, all items on auction have been sold.

Celebrities, politicians and activists have shown interest in the auction, with Bollywood stars, including actors Anil Kapoor and Arjun Kapoor, and singer Kailash Kher, endorsing it.

The lowest base price was set at ₹500 for items like a small statue of Lord Ganesha and a decorative wooden box shaped as a lotus.

The highest base price of ₹2.5 lakh was reserved for an acrylic painting with a tri-colour background of Mr. Modi and Mahatma Gandhi, which received a final bid of ₹25 lakh. The Culture Ministry did not provide details on who had gifted the painting.

A framed photograph of the Mr. Modi receiving blessings from his mother, reserved at a base price of ₹1,000, has received a bid of ₹20 lakh.

Other popular auctioned items include an exhibit of Manipuri Folk Arts, which had an original base price of ₹50,000, but sold for ₹10 lakh.

Vetrivel, 75, father of Rajiv Gandhi assassination case convict Murugan died at a hospital in Sri Lanka in the early hours of Monday. Murugan is at p Source: thehindu.com Related

The authorities snapped the mobile Internet link in the Kashmir Valley on Sunday, as life was affected by the shut-down called by the banned Jammu and Kashmir Liberation Front (JKLF) and the Hurriyat to mark the seventh anniversary of the execution of Parliament attack case convict Afzal Guru. The police have registered a First Information […]

With the relaxation of curfew for 12 hours from 6 a.m. on Sunday, the city is returning to normalcy. The city buses, inter-district and inter-State buses have begun their operations. Autorickshaws and other vehicles are plying. Many shops and hotels are open in the central business district area. Meanwhile, former Chief Minister H. D. Kumaraswamy […]