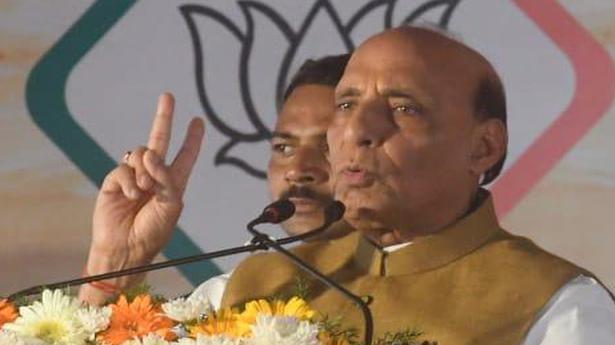 Warning Pakistan, the Union Home Minister Rajnath Singh on Saturday said that Islamabad will have to pay “huge price” if it continued to promote terrorism on its land.

Addressing a rally of BJP workers in the city Mr. Singh said that Pakistan can no longer allow its land for use of terrorist activities. Islamabad can not protect terrorists and allow its country to become a centre of terrorism.

The Home Minister said that India has carried out three counter strikes “by crossing its border” during the last five years. “You all know about the two strikes. I will not reveal the third one,” he said. The two counter strikes were for Uri and Pulwama attacks. He did not elaborate on the “third” counter strike.

The Home Minister said that the two strikes had been carried out as a mission on credible information. He further said: “We will not provoke anyone. But we will not leave anyone if we are provoked.”

Terming the recent invitation by the Organisation of Islamic Cooperation (OIC) to India to its summit in the UAE as a “diplomatic success” Mr. Singh said: “It is not a insignificant matter.”

When popular Malayalam actor Indrans sits seriously before the sewing machine and carefully sews quality cloth masks with ease, it was not acting or becoming part of the Kerala government’s anti-COVID-19 campaign for him, but going back to his own roots. He explained the nuances of stitching and shared tips on how to bring out […]

News Analysis: Will the Ravidas temple agitation have political impact?

A day after the protest by Dalits against the demolition of a Ravidas Temple in Delhi’s Tughlakabad turned violent, Bahujan Samaj Party (BSP) chief Mayawati on Thursday said such incidents were uncalled for and asserted that her party had nothing to do with the damage to public property. “The BSP always honours the Constitution and […]

The Kerala government has opposed in the Supreme Court an alternative route proposed by Karnataka to bypass the night-time traffic ban on the National Highway 212 through the Bandipur National Park. In an affidavit, Kerala submitted that the alternative route goes through the Nagarhole Tiger Reserve in Karnataka and Tholpetty wildlife sanctuary in Kerala “where […]