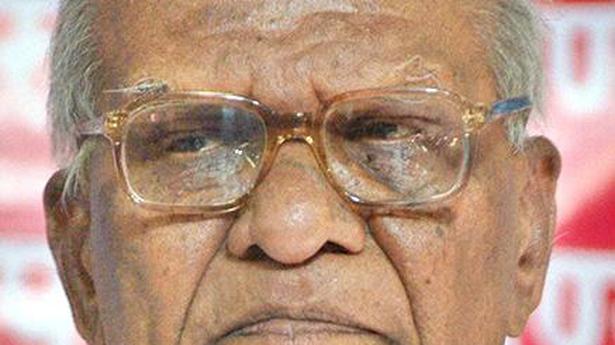 The Bombay High Court on Thursday said the State has been reduced to a laughing stock by adopting elementary methods in probing rationalist Govind Pansare’s killing.

A Bench of Justices S.C. Dharamadhikari and B.P. Colabawalla summoned Maharashtra home department’s additional chief secretary on March 28 to explain the cause of the slow progress made in the case.

“Let the State feel some pressure. It must face consequences some day. For most often, the police get away. No memos are issued, no explanations sought,” the Bench said.

“If crimes will be probed only after the court’s intervention…If in matter after matter, judiciary is the only saviour, then it is a tragedy. What message are we sending to society?” the judges asked.

They were irked after reading a progress report, submitted in a sealed cover by Maharashtra CID’s Special Investigation Team (SIT), in the Pansare case.

As per the judges’ observations made in an open court, the SIT submitted, among other things, that in order to trace two absconding accused, it questioned their relatives.

It also submitted that one of the absconding accused owned an immoveable property in the State and, therefore, the SIT visited the place to trace his whereabouts.

The HC, however, said the SIT must realise that after four years since the crime was committed, it was unlikely the accused would stay somewhere within the State, or close to the crime spot.

“What stops them from going and hiding anywhere across the country? Merely because someone owns a property doesn’t mean he will stick around in that area. The accused can seek shelter anywhere in the country. The elementary steps you are taking to nab the accused have reduced you to a laughing stock,” the Bench said.

“Because of you, the public has a perception that some people can get away, remain uninvestigated only because they enjoy a certain patronage,” it said.

It said a progressive state such as Maharashtra must feel proud of its thinkers and rationalists. “The State can’t be a silent spectator. This is not a movie that you (police, probe agencies) come after everything is over. And if you (politicians) can’t protect your people, then do not contest elections,” the HC said.

The Bench also directed the Central Bureau of Investigation (CBI), probing the 2013 killing of rationalist Narendra Dabholkar, to tie up all lose ends in its investigation without further delay.

The CBI submitted before the HC on Thursday that while the shooters in the Dabholkar case were traced, arrested, and the charge sheet was filed, it required some time to probe some additional issues, like arms and weapons used by the accused.

Pansare was shot at on February 16, 2015, in Kolhapur and succumbed to injuries on February 20.

The CBI and the State CID are probing the killings of Dabholkar and Pansare, respectively.

The HC has been hearing a plea filed by the family members of Dabholkar and Pansare seeking a court-monitored probe in both the cases.

Cong. factional feud at its peak at Kadungalloor

Members of Congress factions in Kadungalloor exchanged blows at a reception held for newly elected mandalam and block representatives on Friday. A sec Source: thehindu.com Related

Indo-Pacific one of new concepts in changing world: Jaishankar

External Affairs Minister S Jaishankar said here on Tuesday that the changing world had thrown up new concepts and approaches and the Indo-Pacific was one of them. Mr. Jaishankar arrived here on Tuesday on a two-day visit to Russia during which he will hold talks with his Russian counterpart Sergey Lavrov and finalise the preparations […]

Residents not amused as Amma Park shuts them out

Amma Park in Virupatchi, Oddanchatram, has not served its purpose. Located near freedom fighter Gopala Nayakkar’s memorial, which was inaugurated recently by the Collector, the park is spread over 50 cents of land and was constructed at a cost of ₹30 lakh including ₹10 lakh for an outdoor gym. However, the plush-looking facility remains underutiliaed, […]