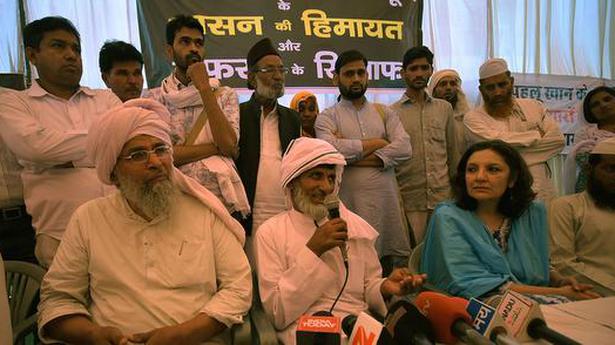 Expressing “huge disappointment” at the acquittals of all six accused in the Pehlu Khan lynching case by an Alwar court on Wednesday, the victim’s uncle Hussain Khan said “justice was not done to the family”. Recalling that Pehlu had been murdered in the open, Mr. Khan said he had hoped that at least a few of the accused would be held accountable for the cold-blooded murder.

“If not all, we hoped the court would hold at least two or three of them responsible for his murder,” said Mr. Khan, reacting to the verdict. “But the court verdict has come as a huge disappointment to us.”

The 61-year-old painfully recalled how, despite financial constraints, he had spent ₹3 lakh on the court case and spent hours doing the rounds of the court seeking justice for his nephew. Mr. Khan, however, was clear that he would pursue an appeal against the verdict in a higher court, and added that he still held hope for justice. Expressing apprehensions that the acquittal of the accused could prove to be an ominous signal for Pehlu’s sons, who are facing charges of cow slaughter, he said the fear was that they could now be held guilty.

Unable to go in person to Alwar to hear the verdict on account of poor health, Mr. Khan said he had called the lawyer around 5 p.m. to ascertain as to what happened in the court, and suspected that something was amiss when the advocate did not answer his call.

Pehlu’s cousin Hakamaddin blamed the police, alleging that they had been “hand-in-glove” with the accused and thus denied justice to the family.

Three juveniles are separately facing trial in the case at the Juvenile Justice Board.

All-India Mewati Samaj president Ramzan Choudhary alleged that the police had acted under government pressure to weaken the case despite there being a dying declaration, eyewitnesses and videos where the accused could be seen hitting the victim. Mr. Choudhary said witnesses had been “forced to turn hostile, bought over and threatened and therefore justice always seemed impossible”.

Observing that a conviction would certainly have helped curb the growing incidence of cases of lynching, he asserted that the common man was bound to lose faith in the judiciary, the police and the government in the wake of the verdict.

‘Water bell’ in schools gets a boost

In an attempt to boost the ‘water bell’ initiative, an NGO has undertaken distribution of water bottles at two Zilla Parishad High Schools (ZPHS). The distribution was carried out at the ZPHS at Venavanka in Karimnagar district and at Suraram village in Warangal (Urban) since the two schools have also started water bell following instructions […]

‘Article-19’ in Manipal from February 20

Manipal Institute of Communication (MIC) will organise its annual fest ‘Article-19’ here from February 20 to 22. A press release issued by MIC on Tuesday said this year’s theme is ‘The Roaring 20s.’ Harshveer Jain, an IIT and IIM graduate, who educates and entertains people through art on social media; Devanshu Kumar and Satyanshu Singh, […]