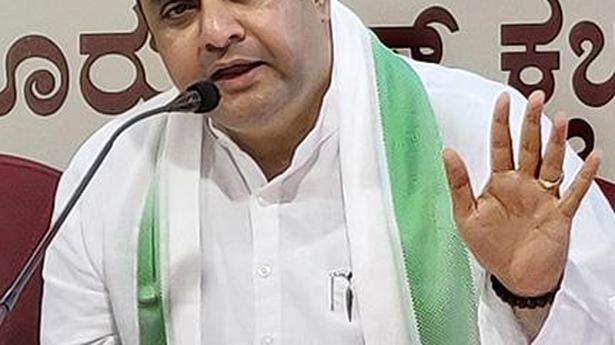 Pramod Madhwaraj, former Minister, said on Sunday that there was nothing new in the phone-tapping charges as the same had been made since the time late Ramakrishna Hegde was the Chief Minister of the State.

Speaking to presspersons here, Mr. Madhwaraj said that it was possible that all CMs may have got phone-tapping done. It was the Intelligence Unit under the CM that did the phone-tapping. No political party had escaped these charges. It may have been done for political, administrative or security purposes, he said.

To a query, Mr. Madhwaraj said that Chief Minister B.S. Yediyurappa had ordered the CBI probe on phone-tapping for political mileage. When Siddaramaiah was the CM, several cases were handed over to the CBI for probe. In fact, the highest number of cases was handed over to the CBI during Mr. Siddaraimaiah’s tenure. So far, there had been no results in these cases, he said. “Earlier the BJP had branded the CBI as ‘Congress Bureau of Investigation.’ Now the BJP has developed a lot of trust in the CBI. This is the difference between the Congress and the BJP,” Mr. Madhwaraj further added.

The Union Law Ministry on Thursday appointed the next Chief Justices of Bombay, Orissa and Meghalaya High Courts. As the current Chief Justice B.P. Dharmadhikari of the Bombay High Court is set to retire on April 28, Justice Dipankar Datta has been appointed to succeed him. Last week, the Supreme Court Collegium had recommended Justice […]

It is the judiciary’s business to protect the Constitution: ex-judge

“Over the last one month, thousands of protesters on the streets across the country have been reading the Preamble of the Constitution for the judiciary to hear. It is the judiciary’s business to protect the Constitution,” Justice K. Chandru, former Madras High Court Judge, said here on Saturday. “It was a Supreme Court judgment which […]

NDA up against anti-incumbency in Cuddalore, Chidambaram

Will the anti-incumbency factor sway the voters in the April 18 Lok Sabha polls in the coastal district of Cuddalore in the State? The answer is yes, if the mood in the coastal belt as well as rural and urban areas in Cuddalore and Chidambaram (Reserved) Parliamentary constituencies is any indication. There seems to be […]