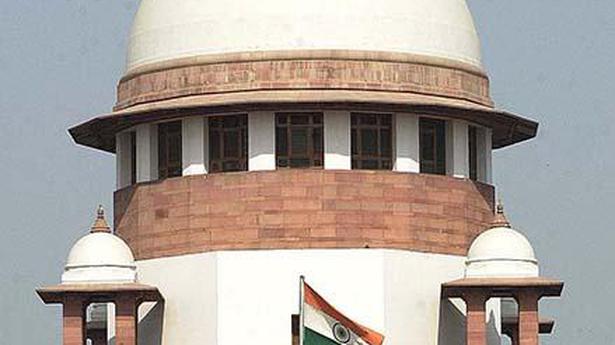 A writ petition was filed in the Supreme Court on Friday seeking protection of the identity of the victims and for an apex court-monitored probe into the Pollachi sexual assault case.

The petition alleged that the accused were politically connected and had links to the ruling AIADMK party in Tamil Nadu. It said the trial of the case should be conducted outside the State. The petition further asked the apex court to direct a departmental enquiry against Coimbatore Rural Superintendent of Police, R.Pandiarajan, who, instead of conducting a free and fair investigation, outed the name of the victim and that of her immediate family member in a press release.

The petition has been filed by a Delhi-based advocate, A. Rajarajan, and Y. William Vinoth Kumar, who is also residing in Delhi. They said the court should intervene immediately as an “extraordinary situation requires an extraordinary remedy.” The petitioners conveyed their shock to the court about the alleged sexual assault of a college student from Pollachi town and the “sex mafia” comprising politically-connected men.

It contended that the current police investigation team under Mr. Pandiarajan was “attempting to underplay the entire issue” and seemed hesitant about nabbing the “whole sex mafia for around seven years in and around the town of Pollachi”.

The petitioners said the intervention of the Supreme Court to “protect the weaker and vulnerable sections of the society is the need of the hour.”

Judicial directions should be issued to the authorities to keep the identity of the victims secret. A general restraint should be put in place against media trials and online publishing of victims’ videos, said the plea.

The petition said that though the CBI is an independent agency, the probe should be monitored by the apex court in order to restore the confidence of the people.

The Tamil Nadu Chief Secretary, Principal Home Secretary, Director General of Police and the CBI have been arraigned as parties in the case.

Work together, not in silos, Modi tells IAS officers

Prime Minister Narendra Modi on Thursday called upon young IAS officers to work together for the nation, saying silos and hierarchy don’t help the system. He called for working towards realising the vision of making India a $5 trillion economy by 2024-25. Mr. Modi was addressing bureaucrats participating in the first-ever Common Foundation Course called […]

Superintendent of Police (Visakhapatnam Rural) Attada Babujee issued a memo to Ravikamatham Sub-Inspector B. Chandrasekhar for allegedly beating up several youth in a cinema theatre. The SP initiated the action after video of the SI beating the youth went viral in social media and was telecast in a few electronic media channels. According to reports, […]

Two women who protested from the balcony of a Delhi apartment when Union Home Minister Amit Shah was holding an outreach programme in support of the contentious citizenship law, said they have been evicted from their house. Surya Rajappan, a lawyer, said when the BJP president was holding a door-door contact drive at Lajpat Nagar […]