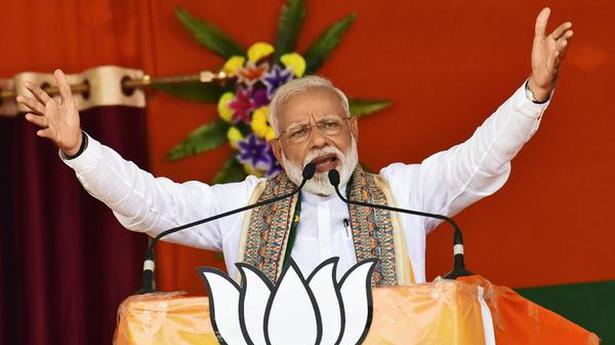 The Opposition should stop expending “crocodile tears” over the withdrawal of Article 370 in Kashmir, said Prime Minister Narendra Modi on Sunday while daring Opposition political parties to bring back special status for Jammu and Kashmir in their poll manifestos.

Addressing a public meeting in Jalgaon as part of the Bharatiya Janata Party’s (BJP) campaign ahead of the Maharashtra Assembly election, Mr. Modi further claimed that both men and women from the Muslim community of India were looking to a bright future because the BJP-led NDA government had made good its promise to do away with the archaic practice of triple talaq.

“The BJP-led NDA government, by acting in accordance with the wishes of the people, took an unprecedented step on August 5 to do away with Article 370. Hitherto, women and Dalits had been denied rights in Jammu and Kashmir. Prior to our abrogation of Article 370 and Article 35A, militancy had reigned supreme in this region,” he said, remarking that the area of Jammu, Kashmir and Ladakh was not just a piece of land but a strategic region vital to the country’s security.

Remarking that abnormal conditions had persisted in Kashmir for more than 40 years, the Prime Minister further promised that it would take the Centre not more than four months to restore normalcy in Kashmir.

“But unfortunately, some political parties and their leaders [the Congress and the NCP] are playing politics over the abrogation of Article 370 and these leaders are trying to solicit votes in Maharashtra… When these parties know that they can do nothing, why are they making so much noise over it,” said Mr. Modi.

He challenged the Opposition to clarify their stance on Article 370 before the public of Maharashtra if they had the courage to so.

Claiming there was no gap between the BJP’s government’s words and deeds, Mr. Modi said that the world was now taking notice and experiencing the energy of a ‘new India’.

“Today, our country is being feted all over the world. And it is not because of Narendra Modi, but the people’s enthusiasm and votes that have helped to bring the BJP-led NDA government back in the Centre,” he said, while appreciating the large turnout of women voters in the recently concluded Lok Sabha election.

Taking potshots at the Congress and the Sharad Pawar-led Nationalist Congress Party (NCP), Mr. Modi quipped that while ‘tired’ parties could be a source of solace for each other, they could certainly not fulfil the dreams and aspirations of Maharashtra’s youth.

He was referring to veteran Congressman Sushilkumar Shinde’s recent remark of a merger between the Congress and the NCP in the near future as both parties had grown tired.

In a jibe at Mr. Pawar, Mr. Modi said he was shocked to see the NCP chief allegedly ‘elbowing’ a man on a stage during one of his campaign rallies.

“I was startled to see a clip in which a prominent leader [read Mr. Pawar] got angry and elbowed a man standing next to him on the dais. The man was trying to squeeze his head into the big garland while his leader was being felicitated… Just imagine that the man who ‘hits’ his own party worker for trying to take a photo, what will he do with the general public?” he said.

Despite the BJP’s confidence ahead of the polls and the prevailing disarray within the Congress-NCP ranks, the ruling party faces the serious prospect of rebellion by disaffected candidates as well as disgruntled Sena workers in a number of places.

Touching on this during his address, Mr. Fadnavis urged party workers not to pay attention to rebels and not support them.

Deriding Congress leader Rahul Gandhi’s ‘belated’ election rally programme in Maharashtra, Mr. Fadnavis said: “First, we [the BJP] thought he [Mr. Gandhi] must be in Haryana. When he was not there, we thought he would be in his constituency in Wayanad. It was only later that we learnt he was in Bangkok while his party is in utter shambles in the State.”

Mr. Fadnavis further said that Mr. Gandhi returned to lead the Congress’ poll campaign in the State only after Congress workers’ insistence.

With the refitting of INS Sindhuvir, a Kilo class submarine, in advance stage of completion, the Hindustan Shipyard Limited (HSL) is hopeful of getting orders from Indian Navy for Medium Refit and Life Certification (MRLC) of fourth Russia-made EKM submarine under the ‘Make in India’ programme. The Indian Navy is understood to have either entrusted […]

Uddhav Thackeray for all-women police stations in every Maharashtra district

In wake of incidents of violence against women in different parts of the State, Chief Minister Uddhav Thackeray on Wednesday directed the Home department to check the possibility of setting up all-women police stations at every district. “The idea behind such police stations is to make women, who are victims of violence or discrimination, feel […]

TDP rural president and former MLA Panchakarla Ramesh Babu on Wednesday announced his decision to quit the party. The reasons he cited were the party’s stand on the YSRCP government’s announcement to make Visakhapatnam the Executive capital and interference of other leaders in his constituency and in the discharge of his responsibility. “I brought to […]