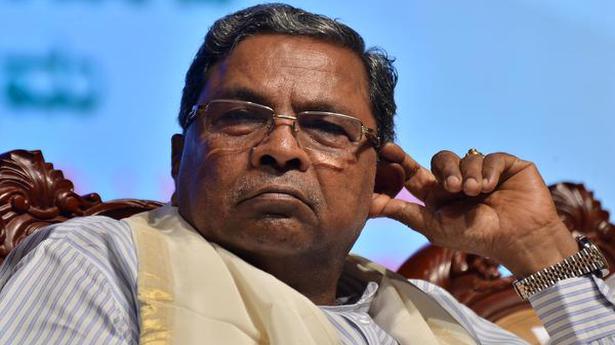 Senior Congress leader Siddaramaiah on October 13 hit out at Prime Minister Narendra Modi, alleging he had time to campaign for U.S. President Donald Trump, seeking a second term in the general elections there in 2020, but not to visit flood-ravaged Karnataka.

Terming the BJP as “fascist” and “dictatorial”, the former Chief Minister accused the State government of ‘colluding’ with the Assembly Speaker in restricting the media from covering the proceedings of the House.

“This time it was unprecedented floods in the State along with drought in some parts.. Central government gave aid only after 60 days that too ₹1,200 crore.. according to me damage suffered is more than ₹1 lakh crore,” Mr. Siddaramaiah said.

Speaking to reporters in Chikkamagaluru, he said, “Modi did not visit Karnataka, he instead was touring foreign countries and had gone to campaign for U.S. President Donald Trump.”

“… Narendra Modi tweets as soon as there were floods in Bihar, expressing sympathy. In Karnataka, when there were about 90 deaths and four to five people are still missing due to floods, he did not express sympathy,” he added.

As many as 2,798 villages in 103 taluks of 22 districts in the State were affected by floods, in which around seven lakh people were shifted to safe areas.

About 3,400 cattles and 91 people died during rains and floods in August.

Further attacking the Prime Minister, Mr. Siddaramaiah said, “Narendra Modi claims to have a 56-inch chest… what is the use of having a big chest without a motherly heart inside it? Having a heart that cares for poor, farmers is very important.”

Questioning the use of Karnataka sending 25 BJP MPs, who according to him have “failed” in getting proper relief to the State, he sought to know how people who protested against the Udupi Chikmagalur MP Shobha Karandlaje, elected her once again.

“Has she visited the flood affected regions of her constituency?” he asked.

Amid criticism over the delay in sanctioning funds, the Centre had recently released ₹1,200 crore as interim relief to the State, which had sent a damage estimate of ₹35,160.81 crore.

Mr. Siddaramaiah also alleged that Speaker and the State government colluded in restricting camerapersons, both electronic and print media, from covering the proceedings of the Assembly session.

“This means that BJP does not believe in parliamentary democracy, basically they are fascist and believe in dictatorship, the same thing Hitler also used to do…,” he added.

The Leader of Opposition alleged the budget was passed without proper discussion on demands, violating rules and procedures of the Assembly.

Coronavirus: Five, including maulvi, booked for hiding information about presence of Indonesians

Five members of a mosque in Bijnor, including the maulvi, have been booked for allegedly hiding information about the presence of Indonesian nationals who had returned after attending the Tablighi Jamaat meeting in Delhi on March 21. The eight foreigners have been put under home quarantine for COVID-19, said a police officer. Additional Superintendent of […]

The Bombay High Court on Thursday granted bail to former media baron Peter Mukerjea, arrested in the Sheena Bora killing case, observing that prima facie there was no evidence of his involvement in the crime. Justice Nitin Sambre granted bail to Peter Mukrjea on a surety of ₹2 lakh and directed that he should not […]