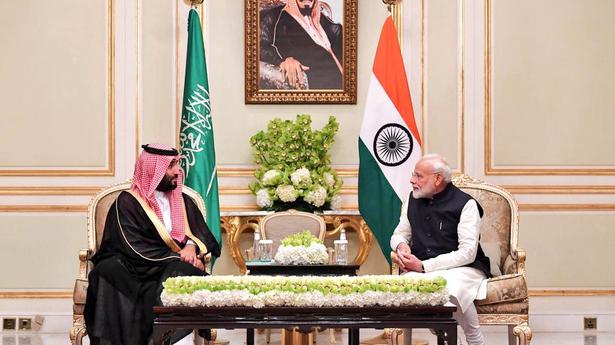 Prime Minister Narendra Modi concluded his visit to Saudi Arabia on Tuesday, during which he held extensive talks with the top Saudi leadership and addressed a key financial forum here.

A memorandum of under standing was also signed to roll out RuPay card in the Kingdom, making Saudi Arabia the third country in the Persian Gulf after the UAE and Bahrain to introduce India’s digital payment system.

Prime Minister Modi also delivered a keynote address at the high-profile Future Investment Initiative (FII), dubbed as ‘Davos in the desert’, where he pressed for the United Nations reforms while expressing regret over some “powerful” countries using the global body as a “tool” rather than an “institution” to resolve conflicts.

At the forum, he said that India will invest a USD 100 billion in oil and gas infrastructure to meet energy needs of an economy that is being targeted to nearly double in five years. He also sought investment from the oil-rich Saudi Arabia and other nations to boost supplies.

This was Prime Minister Modi’s second visit to the country. During his first visit, King Salman conferred Saudi’s highest civilian award on him. The Crown Prince visited India in February 2019, giving a further fillip to the bilateral ties.

Saudi Arabia last month said that it was looking at investing USD 100 billion in India in areas of energy, refining, petrochemicals, infrastructure, agriculture, minerals and mining.

Firmly at the Top

The India Today Mood of the Nation (MOTN) poll in January 2020 adjudged Uttar Pradesh’s Yogi Adityanath as the best-performing chief minister for the second time in a row. What makes the feat all the more striking is that Adityanath is the only BJP face among the top seven chief ministers in the survey. With […]

The multipurpose Assamese gamosa, a ubiquitous, white cotton towel, has been assigned a new function — conservation of rare freshwater turtles. Few cultural symbols are as utilitarian as the white handmade cotton gamosa, with its characteristic red border of woven motifs. It is valued as a gift for visitors, used as a scarf, anti-dust mask, […]